The 2010 April Daring Cooks challenge was hosted by Wolf of Wolf’s Den. She chose to challenge Daring Cooks to make Brunswick Stew. Wolf chose recipes for her challenge from The Lee Bros. Southern Cookbook by Matt Lee and Ted Lee, and from the Callaway, Virginia Ruritan Club.

Honestly my initial reaction to this challenge was…a stew? OK not so exciting. Stews are a pretty common thing in my kitchen in the cold months. Making a stew means you have a lot of prepared portions of a full meal in one dish. My kind of recipe. But nothing exciting. Also since I live alone I cut the recipe in half…I do not need 12 servings of anything lol. And I cheated on one point that cut my prep time in half. I bought one of those cooked BBQ chickens. I did step 1 and 2 by browning my pork (did not get rabbit to $$). Then I removed the skin and shredded my chicken. I combined step 3 and 4 with the chicken wings with skin on and only cooked 30 min and removed nothing after. I did not put butter beans in and used a bag of green and yellow beans instead. I did step 5 and 6 as described.

So, was I still unimpressed once I had my first bowl? 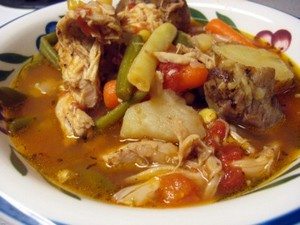 Not at all, it was just delicious. I loved the spicy bite to it. Its my new favorite stew recipe.

About Brunswick stew from Wikipedia:

It is a traditional dish from the southeastern United States. The origin of the dish is uncertain, and there are two competing claims as to the place in the South where it originated. Recipes for Brunswick stew vary greatly but it is usually a tomato-based stew containing various types of lima beans/butter beans, corn, okra, and other vegetables, and one or more types of meat.

The main difference between the Georgia and Virginia versions have been the types of meat used. The Virginia version tends to favor chicken as the primary meat, along with rabbit. The Georgia version tends to favor pork and beef along with squirrel (!!!!!). As there is no “official” recipe for Brunswick stew, it is possible to find chicken, pork, beef, and other types of meat included in the same recipe.

1-In the largest stockpot you have, which is hopefully larger than the 5 qt ones I have, preferably a 10-12 qt or even a Dutch Oven if you’re lucky enough to have one, fry the bacon over medium-high heat until it just starts to crisp. Transfer to a large bowl, and set aside. Reserve most of the bacon fat in your pan, and with the pan on the burner, add in the chiles. Toast the chiles until they just start to smell good, or make your nose tingle, about a minute tops. Remove to bowl with the bacon.

2- Season liberally both sides of the rabbit and chicken pieces with sea salt and pepper. Place the rabbit pieces in the pot and sear off all sides possible. You just want to brown them, not cook them completely. Remove to bowl with bacon and chiles, add more bacon fat if needed, or olive oil, or other oil of your choice, then add in chicken pieces, again, browning all sides nicely. Remember not to crowd your pieces, especially if you have a narrow bottomed pot. Put the chicken in the bowl with the bacon, chiles and rabbit. Set it aside.

3- Add 2 cups of your chicken broth or stock, if you prefer, to the pan and basically deglaze the pan, making sure to get all the goodness cooked onto the bottom. The stock will become a nice rich dark color and start smelling good. Bring it up to a boil and let it boil away until reduced by at least half. Add your remaining stock, the bay leaves, celery, potatoes, chicken, rabbit, bacon, chiles and any liquid that may have gathered at the bottom of the bowl they were resting in. Bring the pot back up to a low boil/high simmer, over medium/high heat. Reduce heat to low and cover, remember to stir every 15 minutes, give or take, to thoroughly meld the flavors. Simmer, on low, for approximately 1 ½ hours. Supposedly, the stock may become  yellow with pieces of chicken or rabbit floating up, the celery will be very limp, as will the chiles. Taste the stock; according to the recipe, it “should taste like the best chicken soup you’ve ever had”. 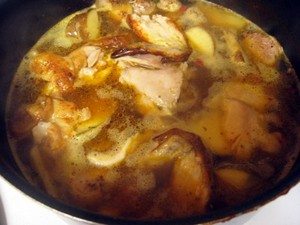 4- With a pair of tongs, remove the chicken and rabbit pieces to a colander over the bowl you used earlier. Be careful, as by this time, the meats will be very tender and may start falling apart. Remove the bay leaf, celery, chiles, bacon and discard.

5- After you’ve allowed the meat to cool enough to handle, carefully remove all the meat from the bones, shredding it as you go. Return the meat to the pot, throwing away the bones. Add in your carrots, and stir gently, allowing it to come back to a slow simmer. Simmer gently, uncovered, for at least 25 minutes, or until the carrots have started to soften.

6- Add in your onion, butterbeans, corn and tomatoes. As you add the tomatoes, crush them up, be careful not to pull a me, and squirt juice straight up into the air, requiring cleaning of the entire stove. Simmer for another 30 minutes, stirring every so often until the stew has reduced slightly, and onions, corn and butterbeans are tender. Remove from heat and add in vinegar, lemon juice, stir to blend in well. Season to taste with sea salt, pepper, and Tabasco sauce if desired. 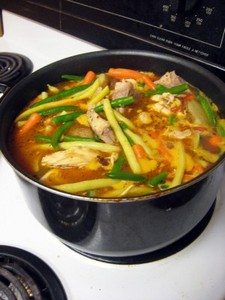 7- You can either serve immediately or refrigerate for 24 hours, which makes the flavors meld more and makes the overall stew even better. Serve hot, either on its own, or with a side of corn bread, over steamed white rice, with any braised greens as a side. 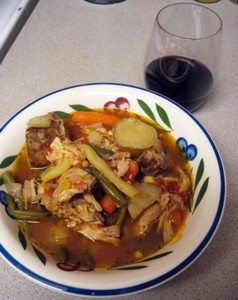