Cream of Almond Soup was a traditional recipe often prepared in Medieval times. Ground or powdered nuts were used to thicken broth and stewed in milk with a spices or herbs.

Before we explore this unusual Cream of Almond Soup, or Crème Almaundys, here is a quick refresher on what is considered Medieval times. The Middle Ages covers roughly the 5th to the 15th century. It is called the Middle Ages because it is the middle period of the three main divisions of history, at least the Western one: first is Antiquity which ends with the collapse of the Roman Empire, second is the Medieval period, and third we have the Modern period which started with the Renaissance. 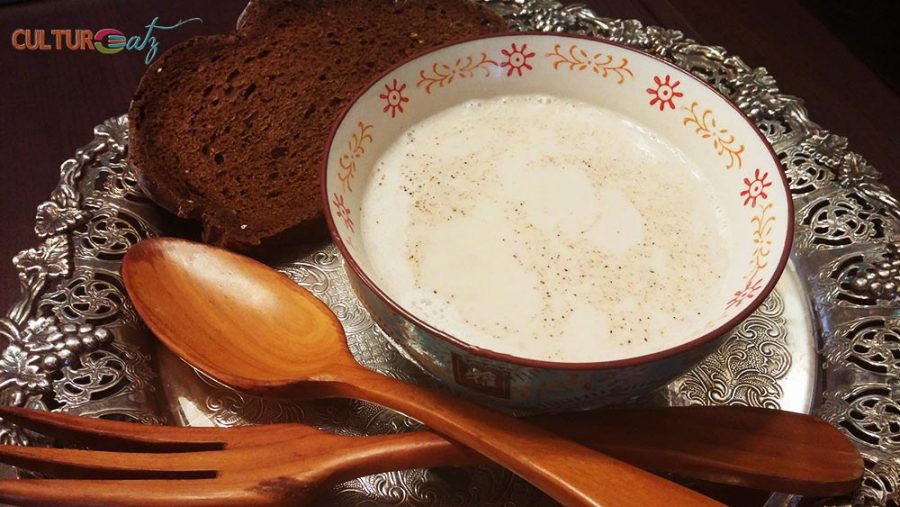 If you want to learn all about what we ate in Medieval times and how we prepared food check out my Medieval Cooking Part 1 post or the Medieval Cooking in Today’s Kitchen cookbook. You will also find a great recipe of a Cornish Bacon Egg Pye recipe on that post too. But today I wanted to explore how food was seasoned at that time.

Spices and herbs, just like today, were used to flavor dishes. But the spices or herbs chosen were often a question of how rich or poor one was, especially for spices. More exotic spices had to be imported and only the rich or nobles could afford them. Common seasoning were black pepper, cinnamon, cumin, nutmeg, ginger and cloves. When you research recipes of this time they are very heavy in these flavors, usually a combination of several different ones at a time.

Herbs were more common as they could be easily grown all over Europe. One could find sage, mustard, parsley, caraway, mint, dill and fennel. The sweet and sour profile was popular and achieved with verjuice, wine and vinegar in combination with spices. And what about thickeners for soups, stews and sauces? Nuts, like almonds, were the popular way to go. Which brings us to today’s recipe… 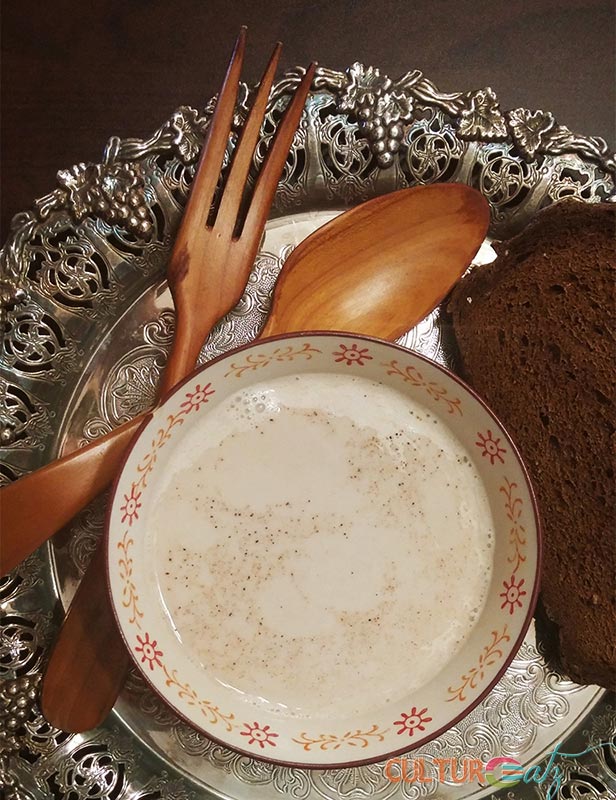 As it was called in Medieval time, the Crème Almaundys is a French recipe dating back to the sixteenth century. One could find such a soup in both Spain and France. Cooking ground nuts in a mix of a broth and a milk creates a very enjoyable rich and creamy bisque. Here we are using almond milk but you could use cow, goat milk or another nut milk as well. The almond milk can be substituted for the same amount of regular milk plus 1 teaspoon of almond extract.

Make this recipe dairy-free by skipping the cup of cream or adding thickened almond milk. And you can make it vegan by using a vegetable stock and skipping the cream.

What does Cream of Almond Soup tastes like? Funny enough it resemble cream of mushroom soup a lot. I mentioned this to a friend who knew the almond version already and she totally agreed. So mushroom soup but a tad nuttier and richer 😉 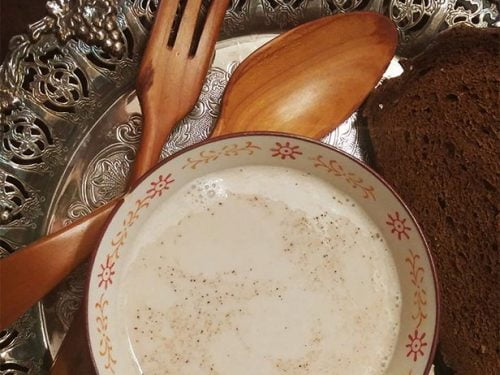 I modernized the recipe which had the original instructions. This is what I left out.
– crushing my own almonds
– making my own stock with 1 medium-size capon and 3 cups water
– 1 tablespoon ground nutmeg for original recipe, I divided in half
– the cream is whipped and added to the soup when serving

The “Medieval Cooking in Today’s Kitchen” cookbook featured in this post was provided to me free of cost for review. Any personal opinions reflected in this post are my own and without influence.