How to Make Lebanese Shish Taouk: now this is an amazing recipe!

Who could resist these beautifully grilled cubes of chicken known as Lebanese Shish Taouk? Marinated in yogurt, lemon juice, tomato puree, loads of garlic and exotic spices, this is one excellent chicken shish taouk recipe.

I am one month away from my 11th blog anniversary. So this is always a fun time to look at the blog’s stats and see which recipes are the most popular. Well, believe it or not, this Lebanese Shish Taouk recipe has been the number one #1 winner for at least two years every time I check. But the post needed a bit of spit and shine so here is my revamped version. I hope it remains your favorite post for a long time to come (but check out the rest of the blog too haha). 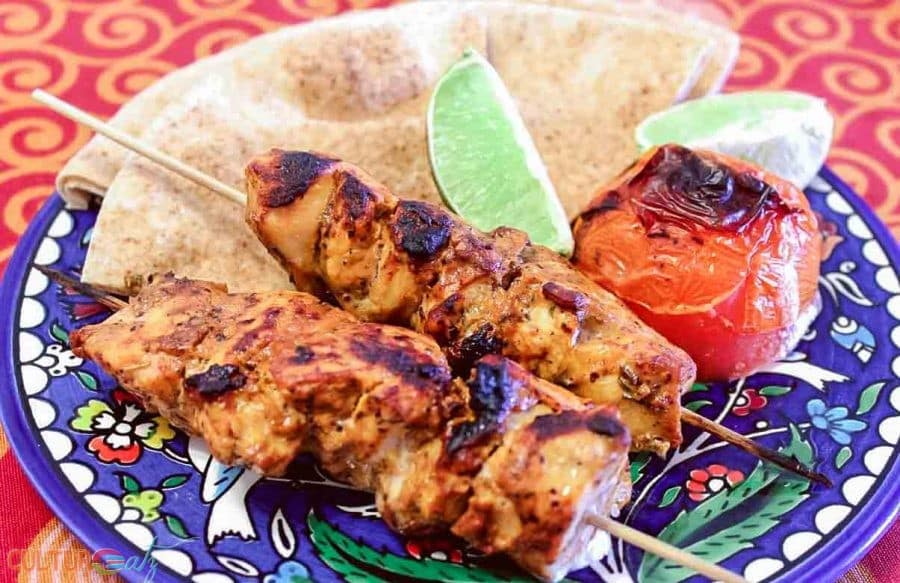 The Republic of Lebanon is a small Middle Eastern country and its capital is trendy Beirut. The country dips its coast along the beautiful Mediterranean Sea and Lebanon shares borders with Syria and Israel. Lebanon is a country with a long and rich history. Phoenician, Egyptian, Roman, Umayyad, Crusader, Ottoman, ruins are scattered about the country. Lebanon is a country rich in natural scenery from beautiful beaches to mountains and valleys.

Most everyone in North America and Europe is familiar with Lebanese cuisine. There is a pita shack almost everywhere. But there is much more to Lebanese cuisine. It includes an abundance of starches, whole grain, fruits, vegetables, fresh fish, and seafood. Lebanese chicken recipes are enjoyed occasionally, as are Lebanese kebab lamb and goat recipes. Grilled marinated seafood and skewered meats often make up the main meal as well.

Did you know that the word ‘kebab’ does not mean skewered automatically? Turns out kebab is any kind of meat dish, from the skewered meat to the patty to the one in a stew. 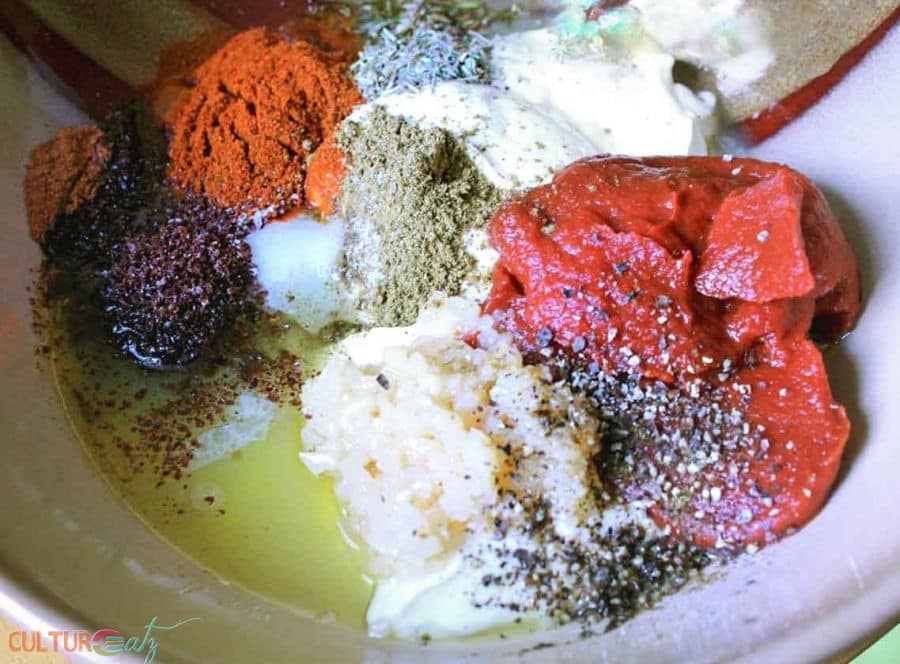 Most often Lebanese food recipes are either grilled, baked or sautéed in olive oil. They also include copious amounts of garlic, lemon juice, herbs, and spices, like most Arabic food recipes. Mezze, an array of small dishes such as pickled vegetables or raw vegetables, hummus, baba ghanouj, are common. The Lebanese flatbread is a staple to every Lebanese meal and can be used to replace the usage of the fork.

Shish Taouk is one of the best know Middle Eastern chicken recipes around.  And even if the name has actually Turkish roots, you can find it in most Arabic countries like the Persians Jujeh Kabob. But for most people, Shish Tawook chicken skewers are synonymous with Lebanese restaurants, often served as a chicken shish wrap.

And it is no surprise we have incorporated these delicious grilled meat skewers into our diet because they are a type of BBQ. I think we all like BBQ a lot, right?

But what is shish taouk specifically? It is charcoal grilled cubes of marinated chicken. The Lebanese chicken marinade includes in yogurt, lemon juice, tomato puree, loads of garlic and exotic spices. I did include a healthy dose of sumac as well. My Lebanese Shish Taouk recipe (also known as chicken shish tawook recipe, or Lebanese chicken skewers recipe, or chicken shish kebab recipe) is adapted from Hungry Foodies recipe. 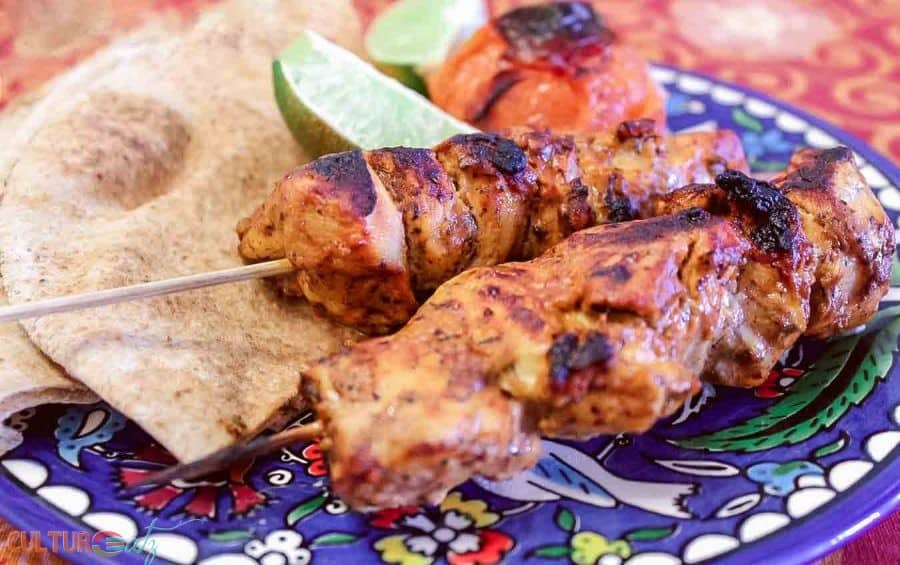 I always get the chicken taouk plate when I got to a popular fast food Lebanese joint in my city. They often cook it traditionally on a long skewer that is rotated by hand. My Lebanese Shish Taouk recipe is a smaller scaled version that can be made at home and tastes just like the real deal.

The shish taouk marinade recipe is tangy and full of garlic. Hence, the finished chicken skewers have much more depth to their flavor. I am amazed at how well this chicken shish kabob recipe turned out at home, it may be even one of the best shish taouk recipe I ever tasted. 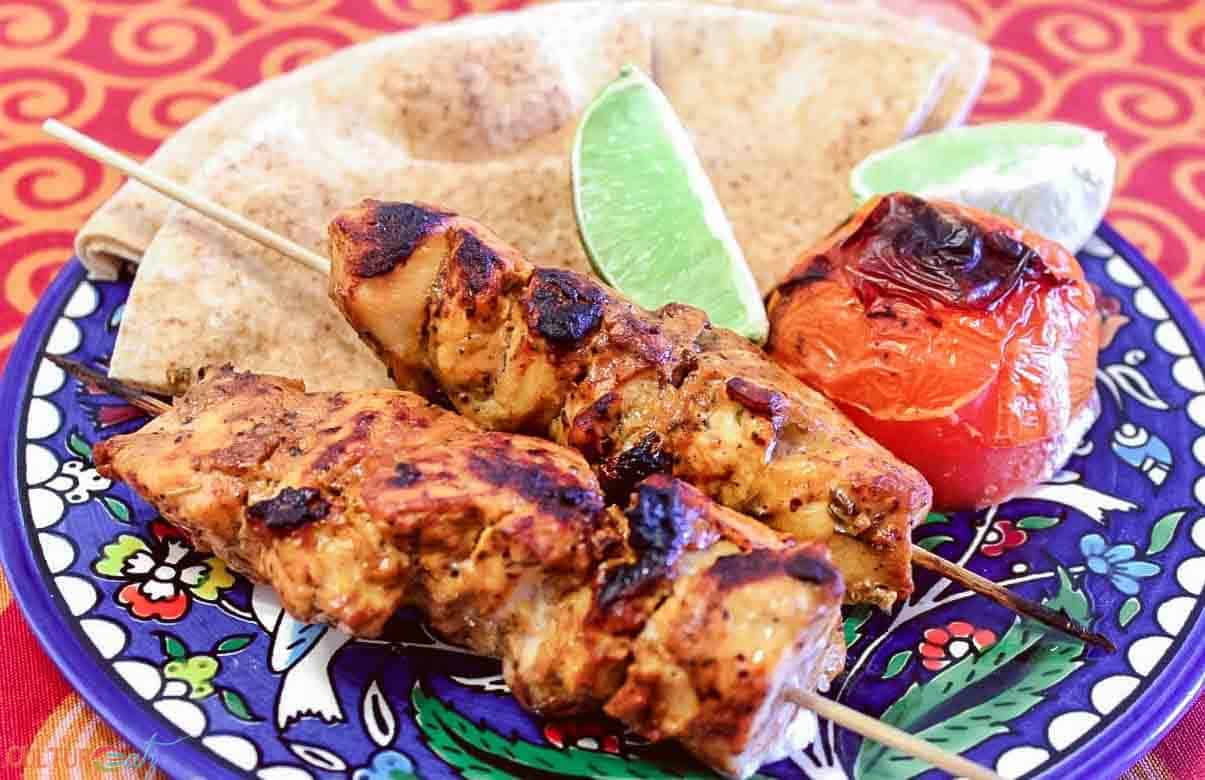 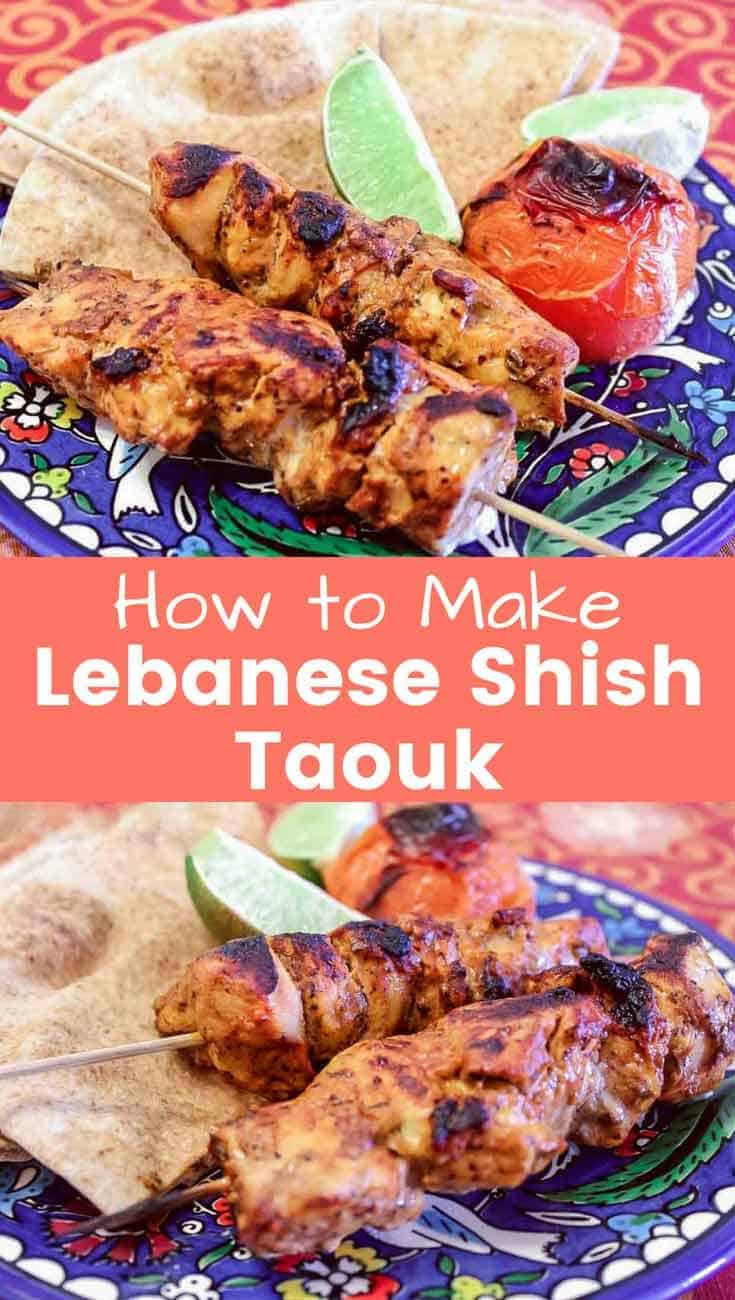