Labrador tea, named after the swamps of Labrador where it loves to grow, was the herbal drink of choice by the indigenous peoples inhabiting the Arctic regions of North America.

Here is a sneak peak at one of the most popular requests from the survey I published a couple of weeks ago. You, my readers, love to learn about unusual ingredients! I used to do posts with unusual ingredients a lot more and I really loved those post. Not sure why I put them aside but let’s bring them back. And the first unusual ingredient to bring back this series is the Labrador Tea.

Just to put some minds at ease, no dog is involved in the process of making Labrador Tea 🙂 , rather the name comes from the Labrador region, one of the few places on earth where this plant grows. And I just so happened to have this tea in my pantry! 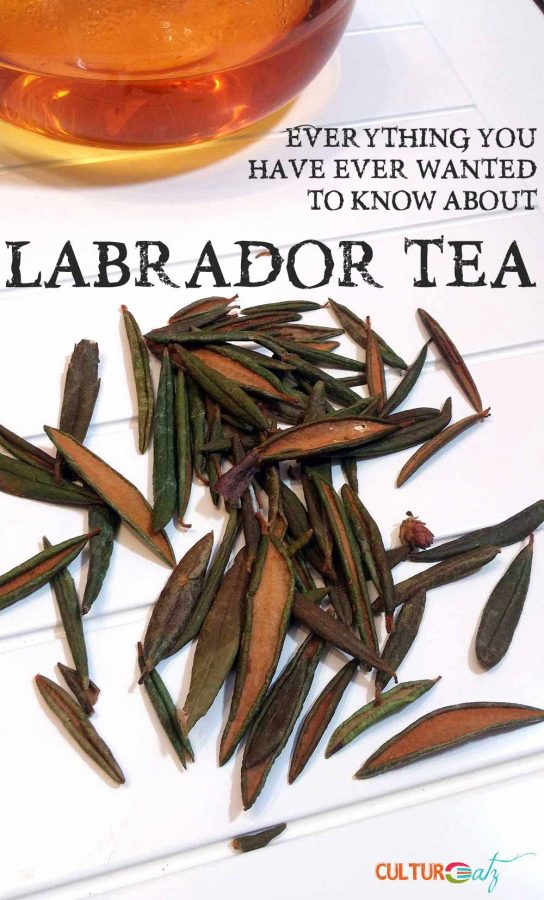 Labrador What Tea?
So in my survey post I had also attached a rather unusual Northwest Territories holiday dinner menu, the kind that might have been served 50 years ago. I think most of you loved reading the menu but were quite glad NOT to attend it ha ha. The beverage of choice was either broth from the main dish or Labrador Tea. And I remembered I had a forgotten bag of Labrador Tea at home so I brew you a pot! 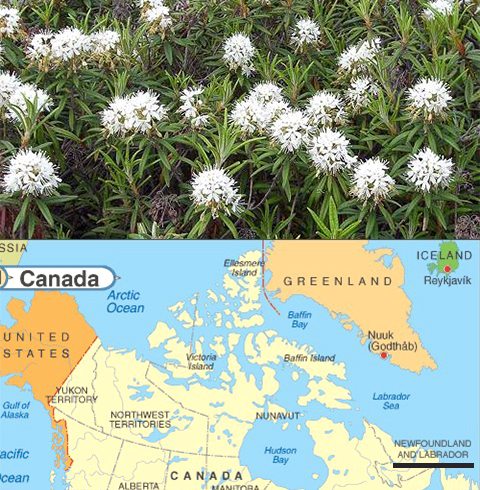 Although no medical research supports the claims, this tea has been used by the Athabaskan and Inuit people for millenniums to help coughs, colds, bronchial infections, and pulmonary infections. Labrador tea is also reported to be a mild sedative and tranquilizer, good for digestion, soothes skin rashes and sores, regenerates the liver, and is an antioxidant.

Eventually Hudson Bay traders got their hands on this tea and sold the leaves. During the American Revolution, Labrador tea was a pleasant and popular substitute for commercial tea. They also realized, like the Germans, that if they added leaves to beer it would make the beer more intoxicating. Modern science now tells us that Labrador tea can have narcotic properties if taken in high doses, and in very rare overdoses can lead to paralysis and death.

Do not fear! Two cups of Labrador tea a day is totally safe, do not worry, but more is not recommend. So what else can you do with Labrador leaves besides tea? Glad you asked! You can actually use it to spice and marinate meat by placing the meat in a decoction made from the leaves and branches (I so have to try this!). It seasons wild game beautifully, you can also add it to spring rolls in lieu of mint, and some us a strong decoction as a substitute for vanilla in desserts.

Don’t just steep the leaves. It is really best to prepare this tea like a decoction. Bring to a boil some water. Measure 1 tsp to 1 tbsp (personal taste) of tea leaves per cup of water, and rolls the leaves in your hand to break them up. Add the leaves to the boiling water and reduce heat to a simmer, leaving the tea to simmer for 5 min, remove from heat and rest for 2 min before straining. You may wish to sweeten the tea with maple syrup or honey.

Now I will be honest, it is not the best tea you will taste in your entire life (which is why it was forgotten in my pantry). I would say the taste reminds me of a grassy pine or balsam fir, and just the the slightest whiff of  turpentine. But remember when you live in harsh environments, like the Arctic, you make do with what the land gives you.

It’s weird, it’s unusual, I have to try it. So I am including this post in my newly renamed category, totally tongue in cheek: Evelyne’s Unusuals. These are informative and discovery posts. You will learn something and sometimes I also include a recipe. I have done my best to add here all the unusual foods I have tried in the past (old posts, be kind, I have grown as a blogger 🙂 ). Check some of them out now…..