This mashed potato candy recipe from Quebec is one of the most unexpectedly delicious candies you will ever make. The sweetness of the Medjool dates melds so well with the sweetened potato dough and peanut butter.

This recipe is super easy and perfect for those with a sweet tooth. The dates add a delicious chewiness that takes these treats to the next level. Whether you’re looking for something festive to bring to your next party or just want a tasty snack to keep around, give this mashed potato candy recipe a try!

This is a must-try recipe for candy lovers! Peanut-free option included 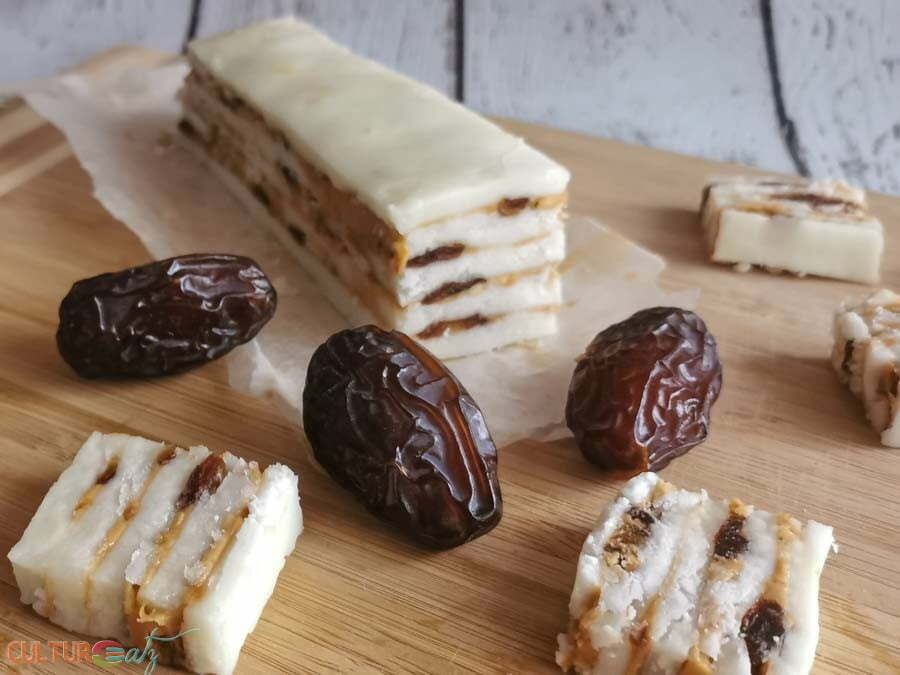 Disclaimer: Thank you to Natural Delights Medjool Dates for this sponsored post opportunity. Note that all thoughts and opinions are my own. LIRE L’ARTICLE EN FRANÇAIS ICI.

Where Does Potato Candy Come From?

Now that is a good question and it depends on whom you ask. I have always known this candy to be a traditional one from Quebec. After some research, I found out it’s not just the French province of Canada. But that is fine, I am keeping it part of my Quebecois heritage by calling it by its French name “Bonbon aux Patates”.

Apparently, this recipe was brought here by immigrants landing in North America. Some say it’s of Irish origin, others say German. And you could find it pretty much along the Appalachian mountains which are located in the northeast. Potato candy could be found in Newfoundland, New Brunswick, Quebec, Maine, and perhaps further south.

It was cheap to make and used a locally grown resource. The mashed potato candy made a resurgence during the Great Depression, for the same reason: cheap and easy.

I do believe it fell out of fashion after the depression because, even if I know about the candy, I had never seen it before making it. I am willing to bet the peanut butter was added later. And dare I say I have perfected it with Medjool dates!

Not All Dates Are Equal

If I used the name date on its own, I bet most of you would think of the dried-up and hard version of this fruit. But that is not the case with Medjool dates.

Available year-round, Natural Delights Medjool Dates are fresh fruits that are never dried. They can be enjoyed in so many ways. Besides as a snack, you can add Medjool Dates to your next savory dish for natural sweetness, or try using them in baking for added texture and flavor.

If you are concerned about your blood sugar levels, adding Medjool Dates to your diet is important. Unlike other foods, dates are digested at a much slower rate. This is due, in part, to the high concentration of dietary fiber that they contain.

Dietary fiber is an essential part of our diet, as it helps to regulate digestive processes and control blood sugar levels. Furthermore, by slowly releasing energy over time, dates give us sustained energy throughout the day. 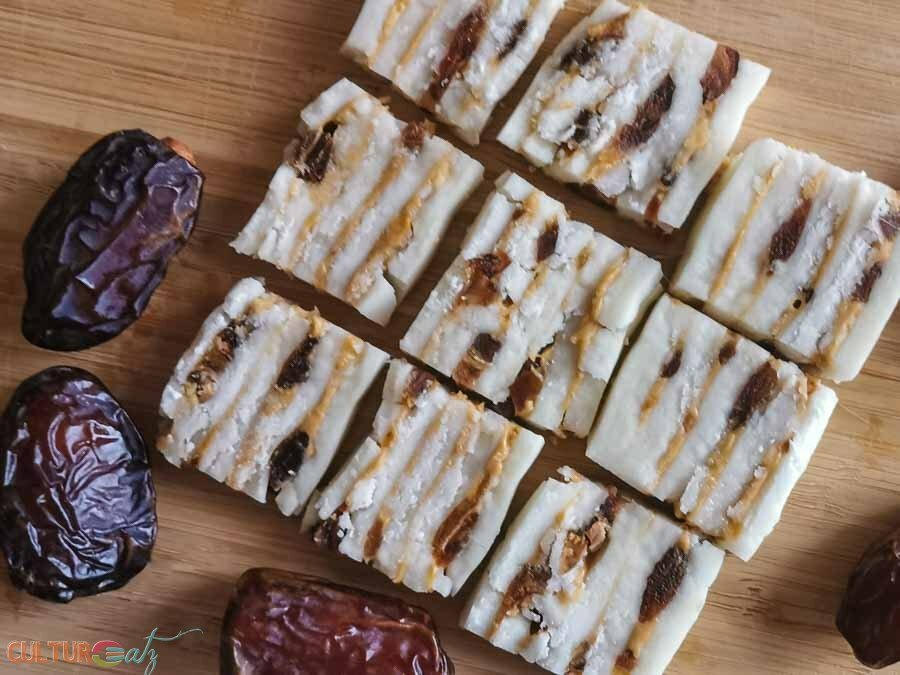 How to Make the Mashed Potato Candy Recipe

I have a feeling that potatoes and candy may have scared some readers away. But it’s actually really delicious and not as potato-loaded as you may think.

The recipe only calls for a quarter cup of smoothly mashed potatoes. Lots and lots of icing sugar is added until you get a pliable but not sticky ball of dough. In other words, potatoes are used as a humectant and glue. You really do not taste the potato at all. I just go an, maybe I should try a sweet potato candy recipe.

The dough is then rolled out and a thin layer of peanut butter is spread over the top. If you have a peanut allergy, you can make this mashed potato candy recipe with any nut butter of your choice.

I then chopped up a few Medjool dates and sprinkled them as evenly as possible. You don’t need to cover the whole rectangle, but enough to make sure every slice will have Medjool dates in it. Roll it or stack it like a log and let it settle in the fridge. Then slice it up and enjoy. 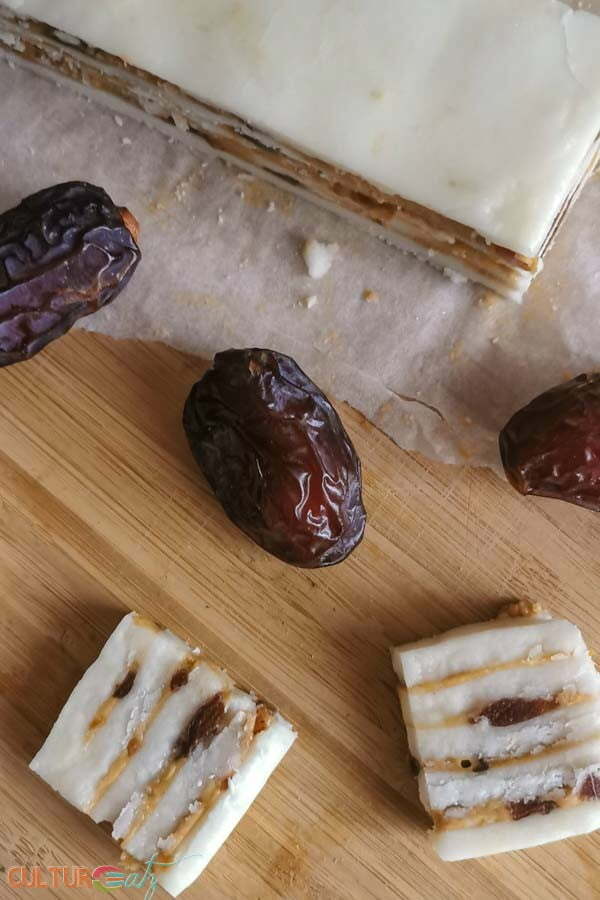 Are You Ready to Try Potato Candy?

If you’re looking for a delicious and easy-to-make candy recipe, this Quebecois mashed potato candy recipe is a perfect choice. The Medjool dates really add a wonderful sweetness and chewiness that takes these treat up a notch.

So if you’re in the mood for something sweet, give this recipe a try! 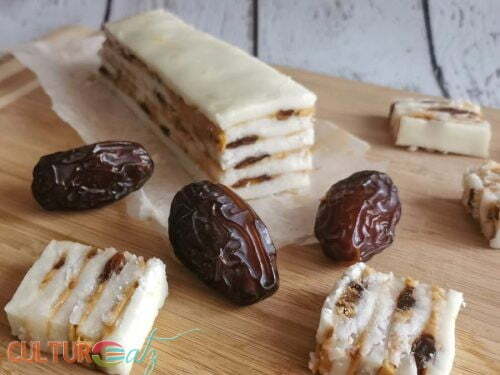 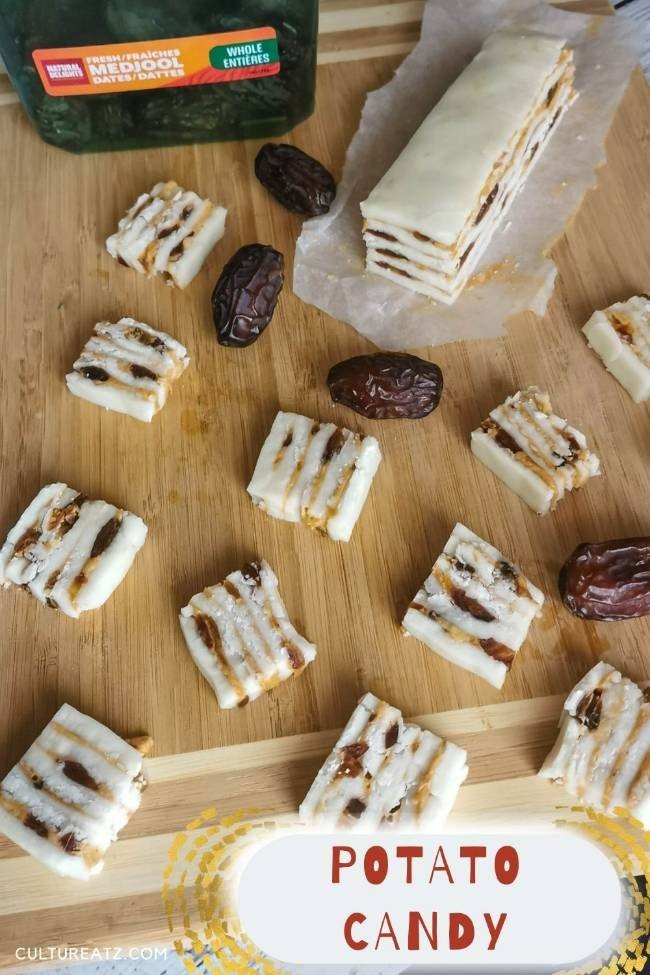 Looking for more date recipes? May we suggest…