Ashe Anar | Pomegranate Soup & it all started 10 Years ago TODAY!

I know everyone is going green today for Saint-Patrick’s Day, but my mind is on a much more important event. Today is a milestone in my life, a reason for great celebration! Ten years ago on this very day I hosted my very first dinner outing under the group Cheap Ethnic Eatz. That dinner group planted the seed for this blog a few months later. The first dinner was held at a now gone Iranian and Iraqi restaurant. In honor of that first dinner, I present to you this Ashe Anar recipe, a Iranian and Iraqi Pomegranate Soup with lamb meatballs. March 20th 2017 it also the Persian New Year. Happy Nowruz! 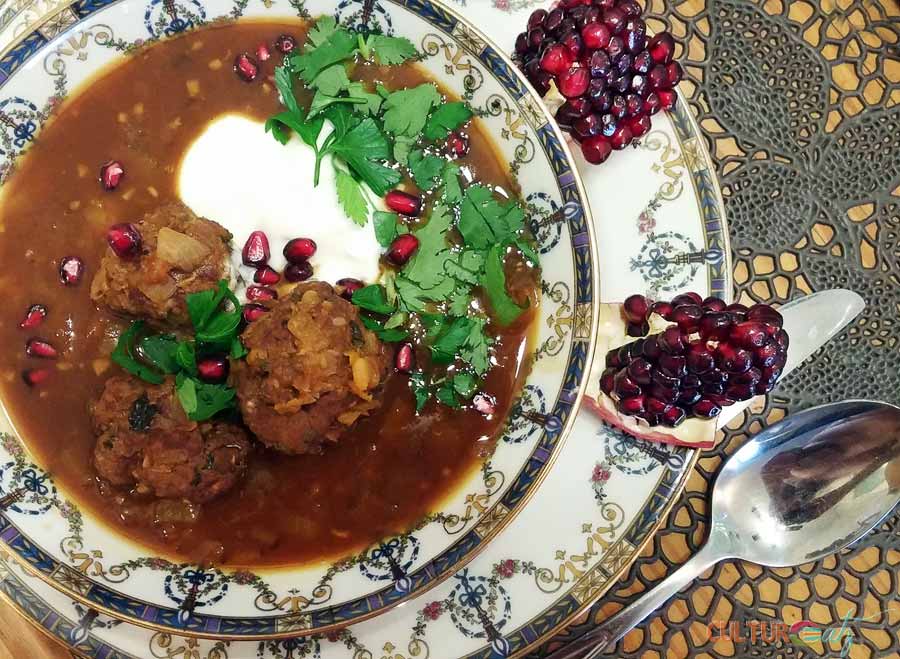 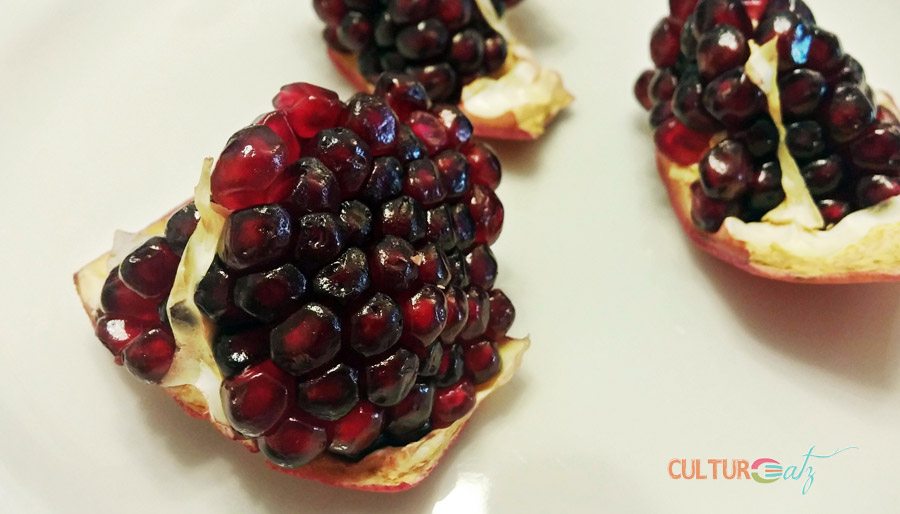 On that first dinner, two other people showed – because I had not realize it was Saint-Patrick’s Day on that Saturday night. I thought this adventure was going to be short lived. Two years later, 85 members showed up for the dinner of the group’s second anniversary. After about 75 dinners, I closed the dinner group in 2010 while it was still in full swing, but the blog lived on.

I am still here, 10 years later, preparing and devouring every morsel of food I can find from around the world. 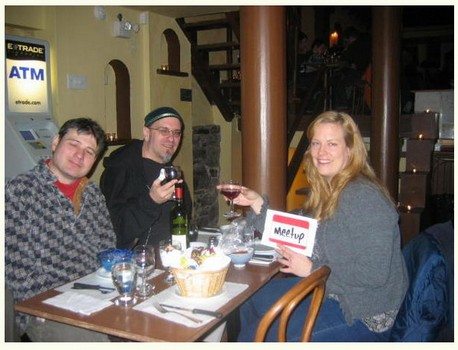 I have so many memories from those dinners. And I have been creating so many more since then. Out of that group a close band of friends was formed. About 20 to 30 of us are still in touch and get together a few times a year. That is an amazing accomplishment. Tonight 15 of us are going out for dinner to celebrate! Even 1 of those 2 people at that first dinner is coming.

I cannot say where this 10 year anniversary dinner will be tonight, it is a surprise. No one knows where we are going except me. I did a few Mystery Dinners in the group and they were a big hit. So my friends are meeting me at a specific time at a subway station and I will lead them to the restaurant. I’ll let you know how it goes! 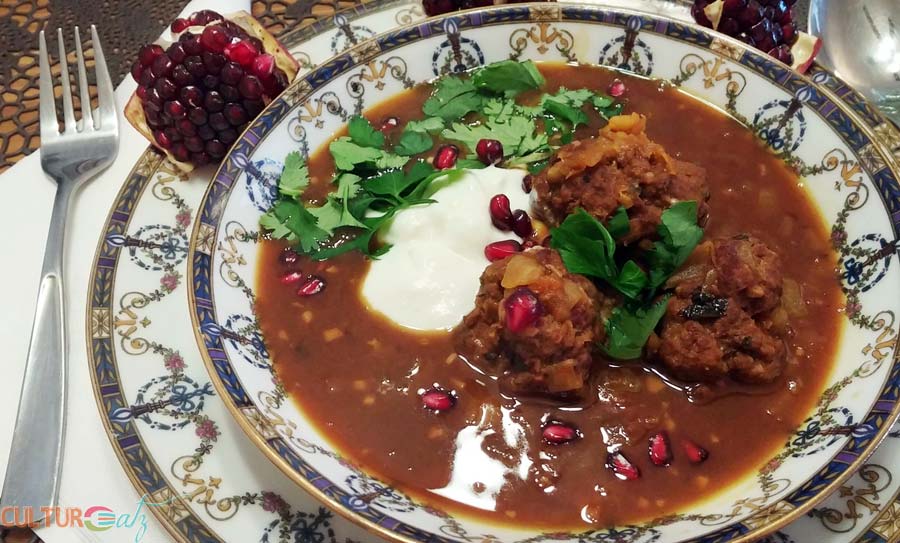 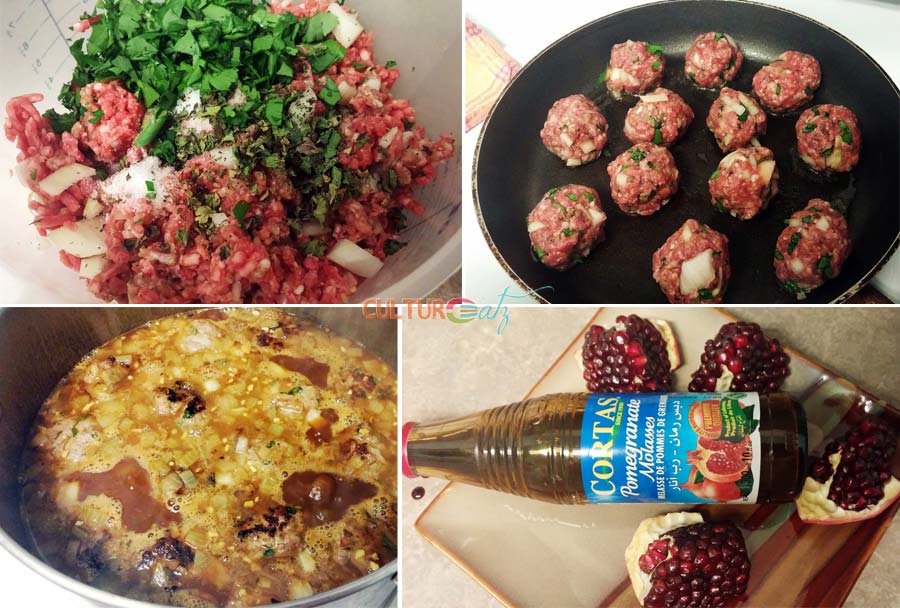 And really by pure coincidence, I am starting a new project today as well! I am launching a Facebook group called YouTube All Food Share. This community is EXCLUSIVELY  for Youtube vloggers who do FOOD videos. You do not need a food dedicated channel, just some food videos. Join us!

Click here to get all the info and to request to join!

Thanks to Laura at The Spiced Life for this recipe. The Ashe Anar recipe, a Iranian and Iraqi Pomegranate Soup, has Persian flavors all over it, well all over your soup spoon. Guys I splurged! I splurged on lamb and on the only pomegranate I could find at 4.50$ a pop! I guess they are not in season.

This hearty Ashe Anar soup is unlike any soup I have ever had. It’s sweet and so tart at the same time – that nerve in your upper jaw will tingle – but works perfectly with the split yellow peas and luscious lamb meatballs. The yogurt brings a welcome respite between bites and the more the coriander on top the better (in my books). I cannot think of a better exotic dish for this momentous 10 year anniversary! 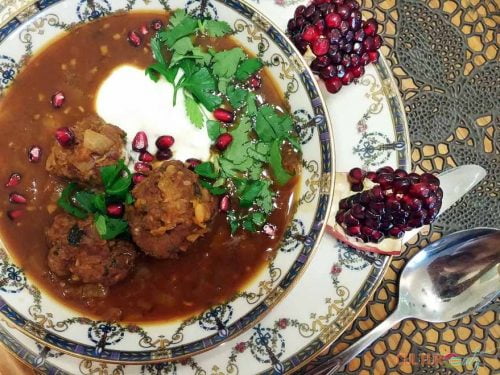