Today is my group’s reveal day for the Secret Recipe Club. What is the SRC? Basically you are assigned a fellow participant’s blog by the organizer and then you pick a recipe of your choice from that blog and make your version of it. But it is a secret, you cannot reveal whom you picked and what you made until the established posting date and time. This month’s secret: Fennel, Grapefruit and Shrimp Stir-fry. 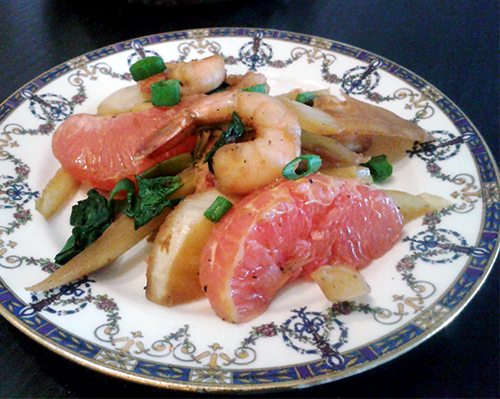 This month I was assigned Culinary Adventures with Camilla. I usually get unknown blogs as match ups on the Secret Recipe Club but this time it was a blog I already knew and was thrilled to have gotten. The blog is written by Camilla and let me tell you she is just a hoot. She describes herself as a “a tree-hugging, veggie-crunching, jewellery-designing mean mommy who loves to cook but hates to clean”. Can I ever relate with her on that last bit. And I have been know to make jewellery but it has been a while since I hugged a tree, as much as I love them ha ha.

Funny enough I also found out this weekend that Camilla is hosting February’s Food n Flix, a great group I also belong to where we watch a movie related to food and cook about it. She picked one of my top 3 fave food films, Babette’s Feast, so check it out and come join us. 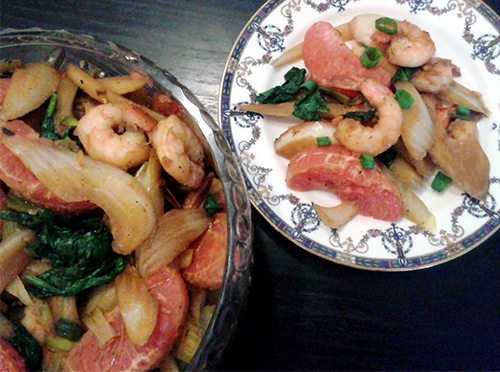 But back to SRC. Ah the monthly conundrum: what will I pick? Here are some of the contenders that almost made it: Wild Boar Rillettes because that is so unexpected, Nigerian Peanut Chicken Stew because I have a similar African recipe and would love to compare, or the basic gelato recipe which you can flavor up any way you want.

Finally I settled on her Shrimp-Grapefruit Orchid Stir-fry dish wish she offered up for a brunch post and I just so happened to be planning a menu for a late brunch at my place. It sounded like a refreshing dish compared to the other heavier ones on my menu. I did it minus the orchid and I substituted the dandelion greens for baby spinach. The stir-fry was delicious and very much enjoyed by all the guests.