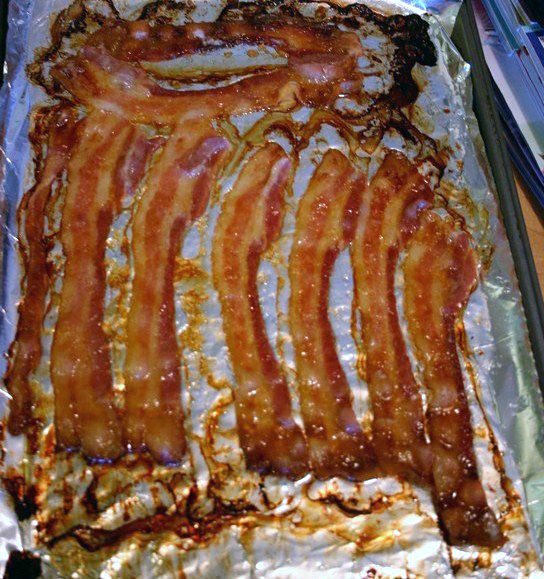 This month I had the pleasure of discovering Sarah’s blog, The Pajama Chef. Fun facts about Sarah: she LOVES peanut butter, she trains for marathons, she is doing a Master of Library Science and a Master of Arts in African Studies, she has traveled to Africa (ethnic food, love it), and given the choice she would wear pajamas 24/7. I guess her powers of suggestions really worked on me because I felt a strong urge to do a breakfast recipe.

I rarely have bacon in the house because a package is a lot when you live alone. But I had one open from last weekend for a couple of recipes and right now I am bacon crazy! So when I saw the Brown Sugar Bacon Waffles recipe it was pretty much a done deal. I called up a friend I had not seen in a while and enticed her over with the waffles. I got an instant YES. So two girls, bacon, waffles, coffee, gossip…good times!

Preheat oven to 375 degrees F. Line a rimmed baking sheet with foil and lay bacon out in a single layer. Sprinkle with 1/8 cup brown sugar. Bake in the oven for about 10 minutes, or until bacon is crisp and sugar is caramelized. Remove bacon from baking sheet to cool on a cutting board [they will stick to paper towels], then chop when cooled. BACON CANDYYYY!

Prepare your waffle iron, turn it on to preheat.

In a large mixing bowl, stir together the dry ingredients–flour, baking powder, baking soda, brown sugar, cinnamon, and salt. In a smaller bowl, whisk the eggs, oil, buttermilk, and vanilla. Fold the wet ingredients into the dry, then add the chopped bacon. Do not overmix–batter will be lumpy.

Cook according to your waffle iron’s specifications. Serve with maple syrup and berries.

Cook according to your waffle iron’s specifications. Serve with maple syrup and berries. Why not go over the top and sprinkle your waffles with chopped up homemade Bacon Chocolate? 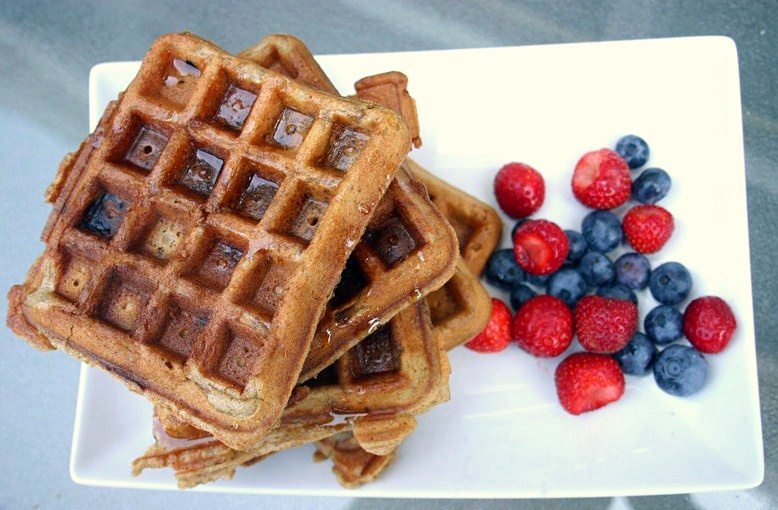