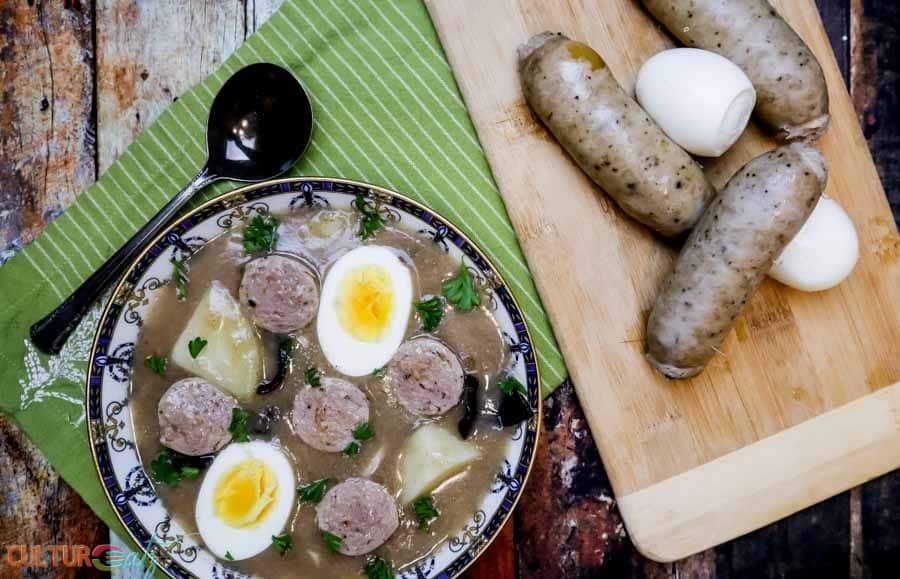 You know beet borscht soup but do you know the other one? Yes, there is a Polish White Borscht Soup recipe and it set’s itself apart with a fermented sour starter, just like bread.

For this month’s Eat the World Challenge we are traveling to Poland. This country has been on my travel bucket list forever. Until I get to actually go, I’ll be able to experience Poland through its foods. Lots of traditional Polish dishes are similar to surrounding countries, like Russia and Ukraine. But when I came across this Polish white borscht soup recipe, I knew I found something really different and had to make it. 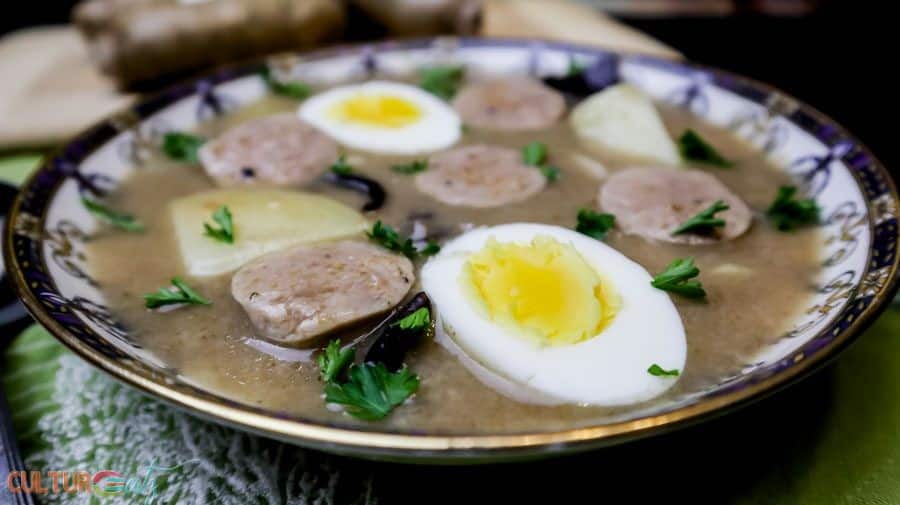 The Polish cuisine is very hardy and similar to neighboring Slavic countries. It is rich in meats and poultry, uses a lot of winter vegetables like potatoes and cabbage, as well as local spices, and herbs. Noodles and grains are common, and there is a heavy hand when it comes to butter, cream, and eggs.

So turns out the word borscht has Yiddish roots and the word was to describe the original ingredient use when the soup was first invented: hogweed! You learned something new today!

The Polish white borscht is described as a sour rye soup as it made of soured rye flour. You basically need to make a starter, like a sourdough starter for bread, before you can make the actual soup.  In the Polish language, the soup is called żur or żurek. The word derives from the German word for sour, Sauer.

This is a peasant soup or a soup for the poor. The list of ingredients is very basic. It can be made clear or thickened with the rye starter. To make it heartier it is sometimes served in an edible bowl made of bread or with boiled potatoes. 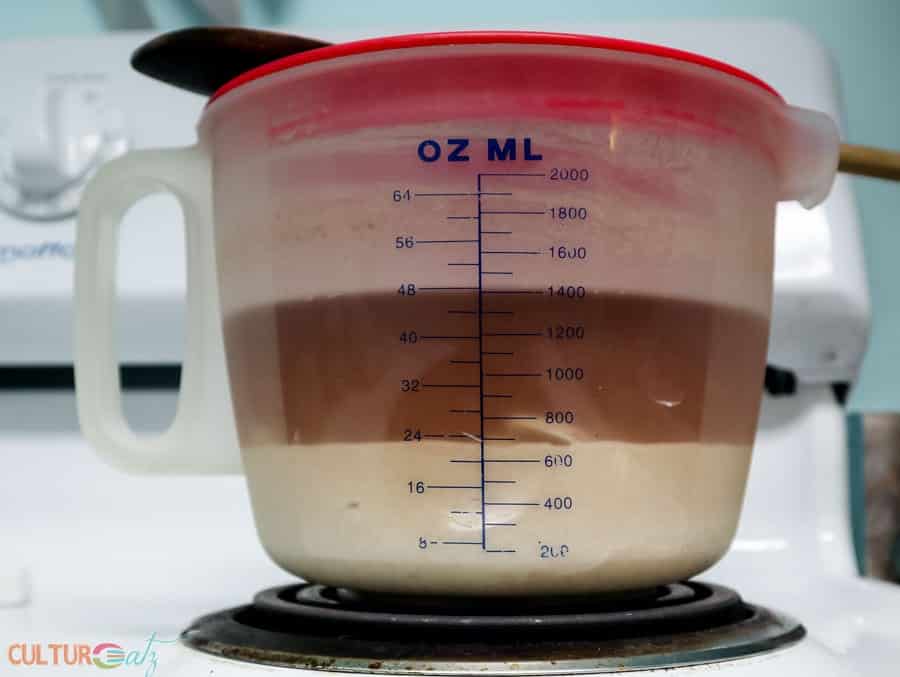 Zakwas is the given name to the special starter one must prepare ahead of time for this soup. It is made of rye flour and water, and for flavor, you can add a bay leaf and a few garlic cloves.

Just mix the start ingredients together and leave to ferment for 3 to 5 days until it is ready. This is where the soup gets most of its unique flavor.

So this soup technically falls under good for you gut fermented food category too! Check out my other fermented recipes: 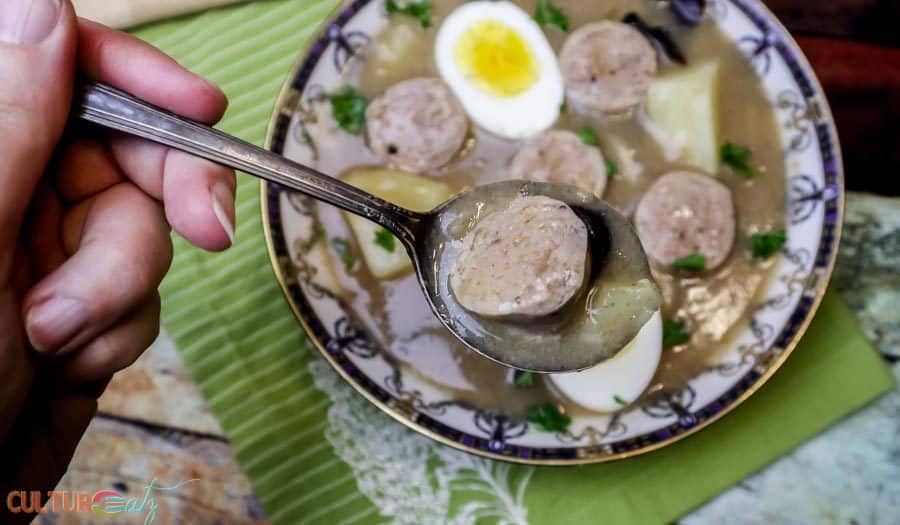 This is also a very traditional Easter soup and for this special occasion, one can add slices of sausage and hard-boiled eggs. A little fresh parsley or dill make the finishing touches. I found a most authentic recipe here.

We all know the beet-based borscht soup but I had no idea there was a white version. And I have to say, it is an acquired taste. one I did not acquire on my first or second bowl. What can I say, we can’t like everything. But the whole point of this challenge is to at least try and discover new foods and flavors.

Maybe this Polish white borscht soup recipe will be the bowl of soup you have been craving all along. 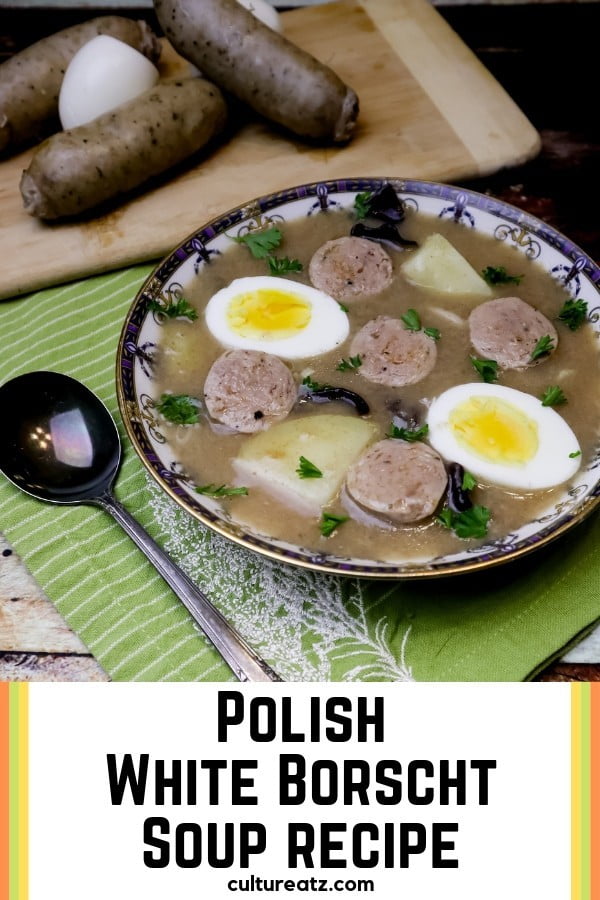 You know beet borscht soup but do you know the other one? Yes, there is a Polish White Borscht Soup recipe and it set's itself apart with a fermented sour starter, just like bread.
Print Recipe Pin Recipe
Servings 8 to 12 bowls of soup

Check out all the wonderful Polish dishes prepared by fellow Eat the World members and share with #eattheworld. Click here to find out how to join and have fun exploring a country a month in the kitchen with us!