I decided to make Momos and served it to my mom on  Mother’s day! Hence Momos for Mama!

Momos Dumplings? I was left very anxious. It’s not something I ever recall making and I had no idea where to start. For the  Pizza Pie event, I was hit with an idea like a bolt of lighting the moment I read the theme. But dumplings? This was going to require some actual thought and research.

So what exactly can be classified as a dumpling? It’s a pretty vast term. According to Wikipedia dumplings are cooked balls of dough. They are based on flour, potatoes, bread or matzoh meal, and may include meat, fish, or sweets. They may be cooked by boiling, steaming, simmering, frying, or baking. Ingredients may be as a part of a filling or mixed throughout the dumpling. Dumplings may be sweet, spicy or savory. They may be eaten alone, in soup, with gravy, or in many other presentations. 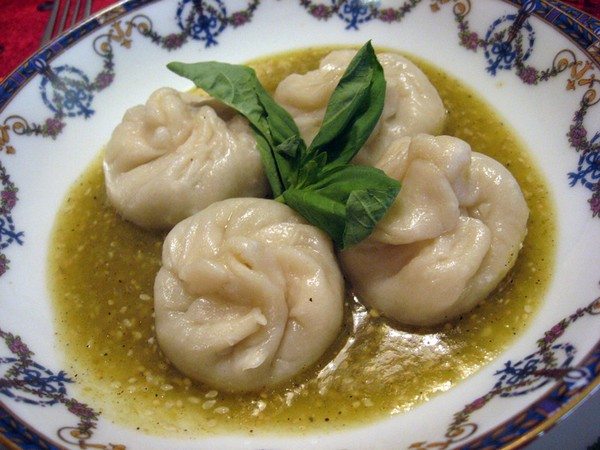 Did I ever mention that I have an unexplained obsession with Nepal and it is at the way top of my travel bucket list? I have not done a lot of research but I have an inner calling to go. The vastness of the rugged land and the spectacular hiking opportunities there are astounding. I hope to go one day!

Yeah that did not help me narrow down my choice! But I did not give up and I Googled on. Ah! finally something inspiring: Momos! Momos are a traditional snack, even considered fast food, in Nepal, Tibet, and Sikkim. I was actually familiar with momos already as there are about 4 Tibetan restaurants in Montreal and I have been to them several times.

The recipe below is actually considered Nepalese. This is a vegetarian version but it can be stuffed with a meat preparation as well. I made these momos as the first service, the appetizer, of our Mother’s day meal. Momos have always intrigued me so it was fun to learn how to make them. It is a bit of a pain in the *** to make the wrappers but it is worth it (and good exercise for the triceps). It was also my first time steaming! Thanks for the learning experience!

Recipe sources: wrappers and adapted sauce from Pokhara City; spinach and cheese filling from The Kopan Cookbook by Betty Jung.
Makes about 28 momos

In a large bowl combine flour, oil, salt and water. Mix well, knead until the dough becomes homogeneous in texture, about 8-10 min. Cover and let stand for at least 30 min. Prepare filling and sauce in the mean time.

Parboiled spinach and allow to cool. Squeeze out all the water and chop. In a medium bowl, combine the spinach, cheese, melted butter, salt and pepper. Set aside. 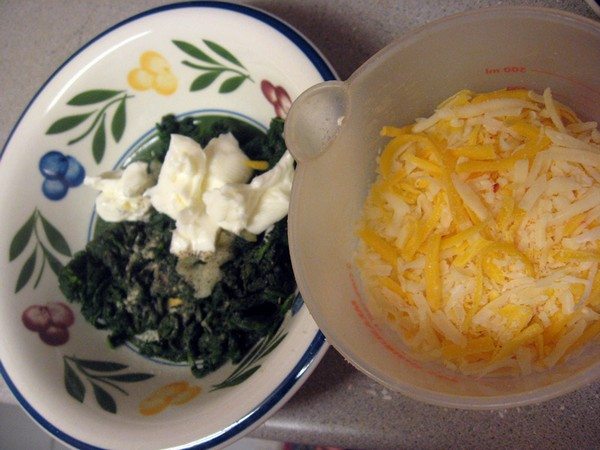 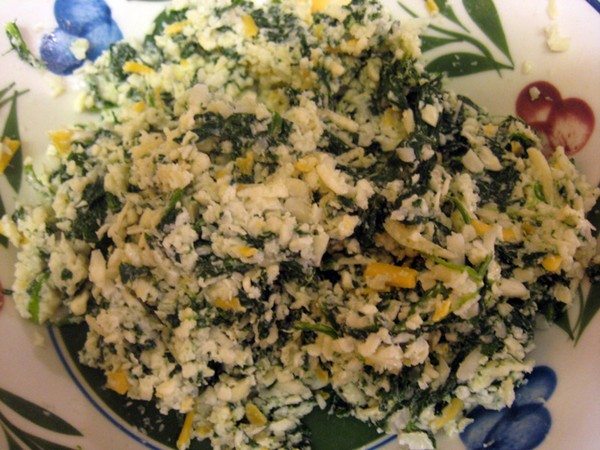 8 to 10 tomatillos (or use 4-5 regular tomatoes with a dash of lemon juice)
1 tbsp sesame seed and Chili powder
1 tsp garlic, crushed
Salt and pepper to taste
water, if needed.

Put all the ingredients in a blender. Blend till the tomatoes are almost pureed. Add a bit of water if to thick. You want a thick liquid consistency.

Give the dough a final knead.

Prepare 1-inch dough balls. Take a ball, roll between your palms to spherical shape. Dust working board with dry flour. On the board gently flatten the ball with your palm to about 2-in circle. Cover with a towel the flattened balls so they do not dry out.

Use a rolling pin to roll out each flattened circle into a wrapper. For well-executed Momos, it is essential that the middle portion of the wrapper be slightly thicker than the edges to ensure the structural integrity of dumplings during packing and steaming. Hold the edges of the semi-flattened dough with one hand and with the other hand begin rolling the edges of the dough out, swirling a bit at a time. Continue until the wrapper attains 3-in diameter circular shape. Repeat with the remaining semi-flattened dough circles. Cover with a towel the flattened balls so they do not dry out. 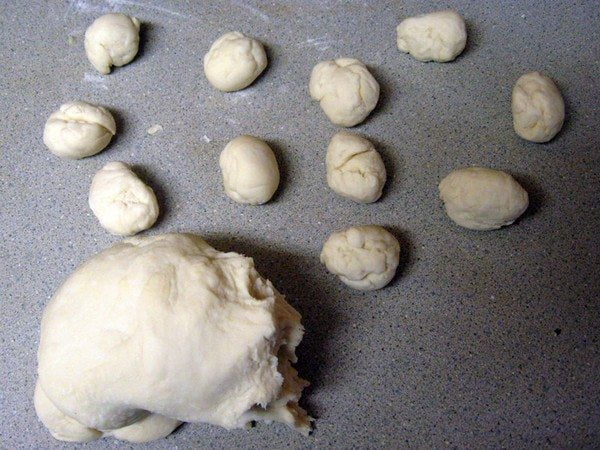 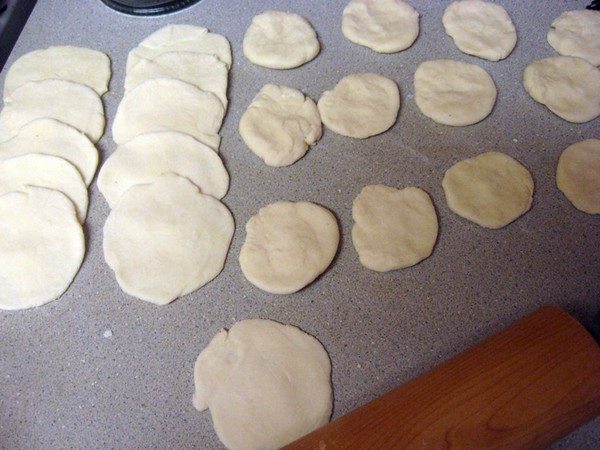 For packing hold wrapper on one palm, put one tablespoon of filling mixture and with the other hand bring all edges together to the center, making the pleats. Pinch and twist the pleats to ensure the absolute closure of the stuffed dumpling. This holds the key to good tasting, juicy dumplings. 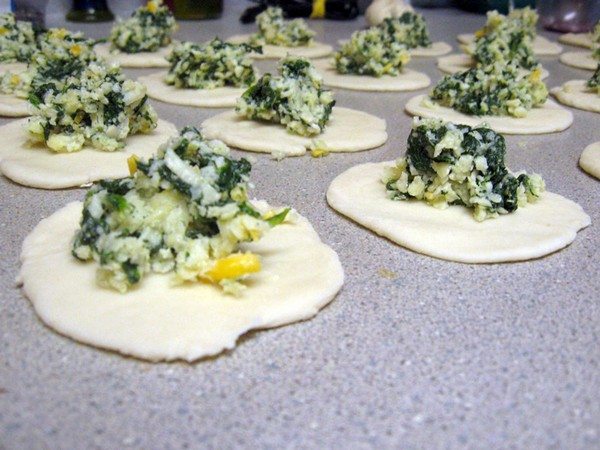 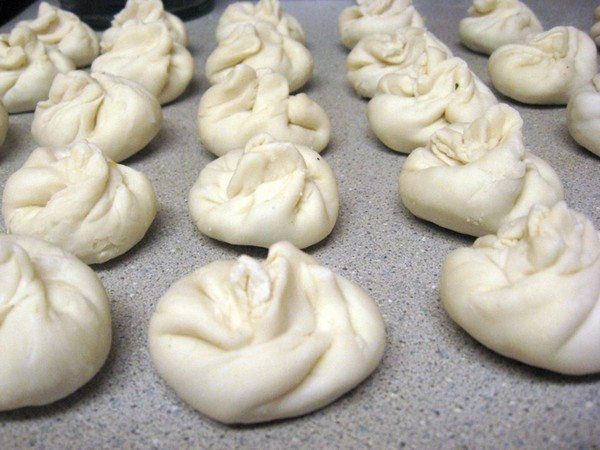 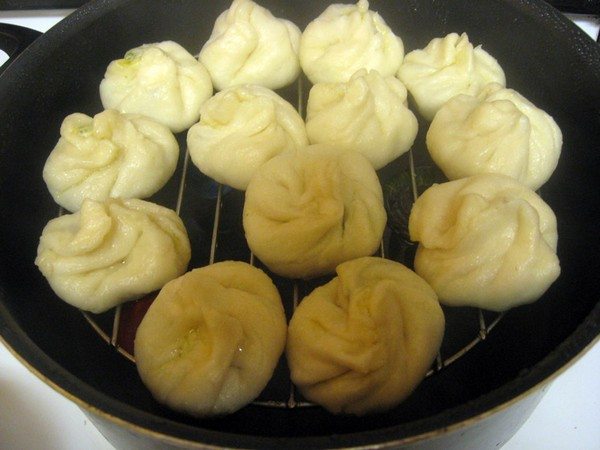 To serve, arrange the cooked Momos on a plate dressed with the tomatillo sauce. Decorate with cilantro or basil leaves. Enjoy!