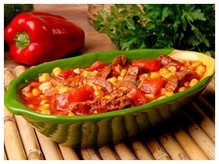 Last night I had my friends over:Â  Manon,Â  Hector and their 6 months old Antonia…my “niece”. She is TOO CUTE and she loves me he he.

As silly as it may sound its the first time ever Hector came to my place..after him being in Manon’s life for the last year and a half-ish. He is Chilean and moved here a few years back. So I decided to prepare a traditional Chilean dish: Tomatican Con Pulpa De Cerdo, in English Corn And Pork Stew. This is a traditional mountain/farmer recipe that is served like once a week, at least according to him.

Although I got the basic recipe online what I am posting here has been modified. Once I got enough wine into him I asked him for a sincere critique and so I adjusted the recipe to make it really traditional. He only made two suggestions. Besides that he loved it, was touched and said it really brought back memories for him.

Its cheap, easy to make and very hardy! I served it on rice. Enjoy!

Directions
Saute pork in oil just to brown a bit.

Season with salt and pepper and add onions and eggs, saute until onions are a bit translucent and eggs are cooked and scrambled

Add corn, cilantro,Â  jalapeno and water if it is too consistent (it should be liquid a bit) , simmer 15 minutes and serve on rice.