As you know I often have friends over participating in my kitchen, especially for the daring kitchen challenges.We always have a blast and the same friends often come back for more. Well this time the tables were turned, so to speak. My great friend Karyn has been my guest sous-chef several times and has performed many stunt appearances on this blog lol. This time she had us over to here place for a whole weekend. Yes this dates back about 6 months already when the leaves were green and coats were laughable. Her breakfast treat was such a hit I asked her to write up a post on it. And finally here it is. Take it away Karyn….

Finally, after talking about it since last summer, the time had come. Evelyne and Raquel were coming to my house for a sleepover! Guest rooms (OK, I only have one) and the couch were prepared, the kitties preened and I made darn sure that the pool was ready to be swam in, since Evelyne had warned me, come Hell or high water, she was swimming! Once I located my guests, at the locations they were supposed to.. or maybe not supposed to meet me at, we went to my place. That night, we had a nice BBQ of my home made hamburgers and hot dogs (veggie burgers and soy dogs for the lovely Raquel), and that hit the spot for all of us, in between the dangerous libations that Evelyne was mixing up in the kitchen.

The next morning, it was a quiet and slow start… I awoke to find one of my guests was missing! Upon some investigations, I realized that Raquel had not been abducted by aliens (because aliens would have left the sheets and blankets right there, and they were gone too!) She had simply moved downstairs during the night as it was cooler in the basement. 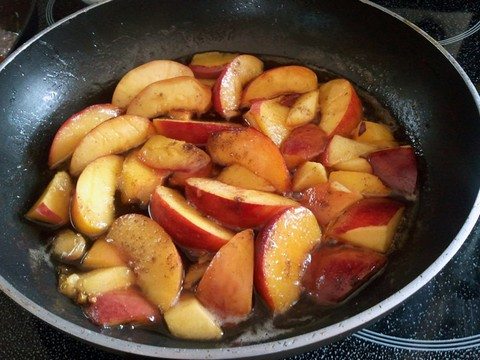 Slowly, both of my guests awoke and made their way upstairs and we all sat on the deck, praying to our coffees and trying to wake up. After a few coffees it was time for breakfast, and I had prepared to make the standard fixings of eggs and bacon for my friends, along with cinnamon raisin bagels that we had picked up the day before along with a basket of beautiful perfect peaches, that Evelyne and I agreed to split. While sitting out on the deck and talking about food (duh, what else.. ) I had a thought! I know what I can make with these lovely peaches, that will be so much more impressive than plain ol’ bacon and eggs! I leaped out of my chair and scurried to get my Martha Stewart cookbook. For my special guests, I was going to make Dutch pancakes! Now, my friends are great friends, not only because of their awesome greatness, but also because we are close enough, and cook together often enough, that I knew they would give me a hand in the kitchen. I set Raquel up with a cutting board and the peaches to slice up for me, while I made the batter. Somewhere along the way, Evelyne took over and Raquel later assumed dish washing duty, which was so appreciated. I even noted to them that the last time I made this recipe, it was for a special someone, and that he never offered to wash the dishes… making me reconsider who I should be cooking for in the future. 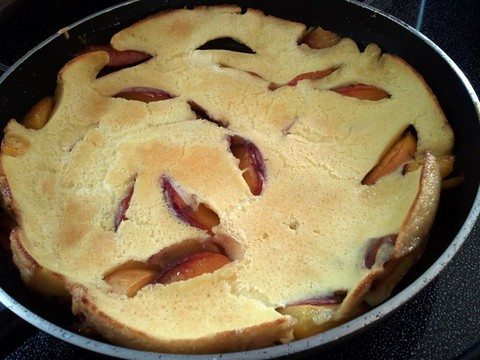 So this scrumptious recipe is started with some butter and honey in the pan to start, then adding in the peaches (the recipe calls for apples) to caramelize and soften the fruit. Well, I had some maple syrup in the fridge, and decided to mark this special occasion of finally having my friends (and first house guests!) over by making two versions, the first with honey and the second with the maple syrup in the pan. The peaches were laid over top of the caramelized mixture, and then topped with the batter that I had made while the peaches were being sliced, and into the oven they both went. In a little while, the house started to smell like the most wonderful mixture of peaches, honey, maple syrup and just good sweetness.

Raquel set a beautiful table outside for us, and we indulged in some apple cider with our breakfast. The dutch pancakes came out beautifully and we ate to our hearts content, sampling each version. I can’t say that the difference is very noticeable between the two versions, but they were both delicious and make a beautiful presentation.

Served with an apple cider