How to Give French Eclairs a Modern Makeover

Did you know French Eclairs are the new ‘it’ pastry? These retro desserts are making a huge comeback right now at you local chic bakery. But it’s even more fun to make them at home. Let you inner artist run wild when decorating!

Raise your hand if you devoured a many eclairs in your youth? This French pastry is made with pâte à choux, shaped in an oblong vessel that transports whipped cream or custard cream to your mouth, formerly finished off with a chocolate ganache. The new modern French eclair sheds it’s ganache coat for gorgeous and artistic edible works of art. 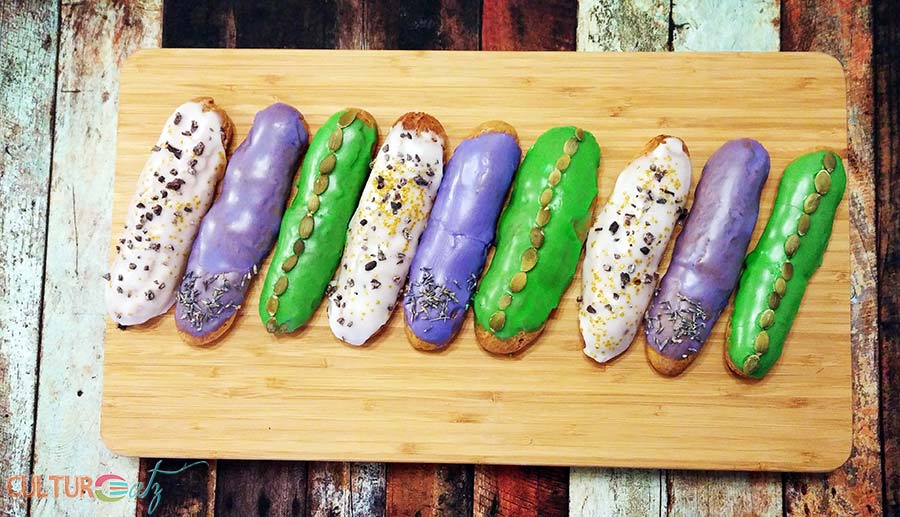 French Kiss is a 1995 romantic comedy film starring Meg Ryan and Kevin Kline. The story is about a woman named Kate who flies to France to confront her cheating Canadian fiancé and finds trouble, then love, with the charming crook named Luc which is seated next to her on the flight over to France. OK so I am not a fan of chick flicks and I really can’t stand Meg Ryan. This film was not for me, but I guess for the genre it is good. There were two saving graces for me: I do like Kevin Kline a lot and it was fun for me to watch without the need of subtitles since I am French Canadian.

Times change! One now ridiculous comment in this movie was a character mentioning a 14% interest rate return on an investment. Wow gone are those days right? Also I spotted a funny ‘mistake’: the Air Canada flight attendant spoke European French on the speakerphone. I can assure you that this would not happen, in reality she would have a Canadian French accent. It would be the equivalent of a British flight attendant speaking on an American Airline flight, would not happen right?

So funny story: on my first time across the pond alone as a adult I sat next to a really hot French guy and we chatted the whole way, like in the film. Actually it was 1996 so a year after the movie came out. Thankfully my guy was not a crook and we did meet up for dinner at the end of my 2 month jaunt across Europe. Can you believe we could still smoke at that time on a plane? I think we chain smoked the whole way. As a now non smoker, the thought of such a flight is revolting.

Food ‘n Flix itself hosted this month! In this monthly group a host picks a movie of their choice that pertains to food. Everyone watches the movie and then makes a recipe which the film inspired. It can be any recipe you want. Join us! 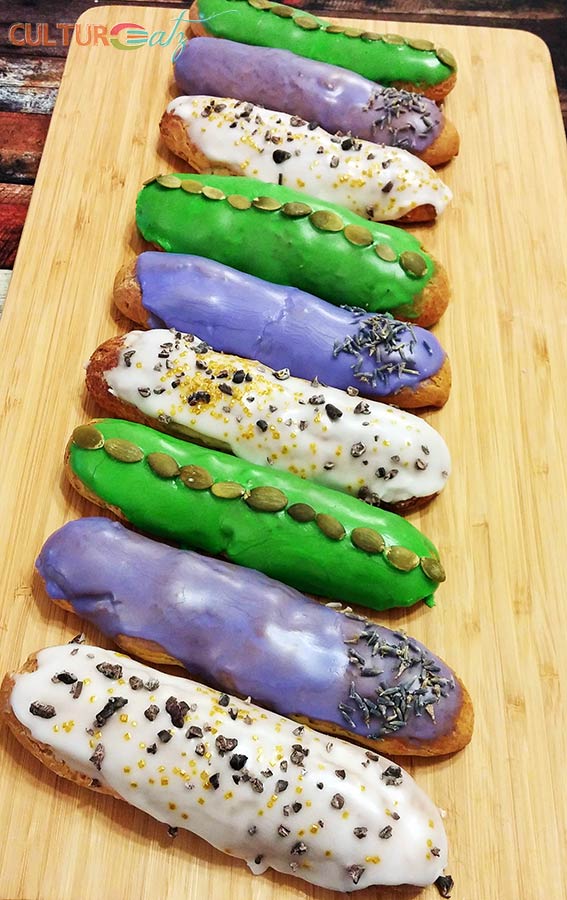 So where does my inspiration for making eclairs come from? I actually had a hankering to make French eclairs for a while and this was a French movie. Another reason was this line, when talking about how she felt when meeting her fiancé, Kate says: “it was not exactly a thunder clap or lightning bolt, it was more like a….” Luc answers: “a light drizzle“.

OK people that is a funny line! Éclair is the French word for a flash or a lighting bolt. These pastries are called éclairs because they can be eaten so fast or in a flash, which in French is “manger comme un éclair”. And my third reason is that the movie starts off in Toronto and right now there is a really hip pastry shop called Nügateau that sells eclairs exclusively. Eclairs are making a comeback right now!

Gone are the days of the plain chocolate ganache icing. Today’s chefs see eclairs as a fun blank canvas to create artistic edible decorations. I have prepared a video for you all where you can see me make my eclair recipe from start to finish. All three recipe parts are presented and in the video I mention a whole bunch of tips and tricks. I hope you will enjoy it.

My recipe sources are: the eclair pâte à choux recipe is from Iron Whisk, my custard cream is from the Dr. Oetker site, and the fondant icing is from the freaking amazing Punschtorte cake I made this fall.

For my three toppings here I used a little bit of a violet liqueur in the fondant and  lavender buds, pepitas, cocoa nubs and gold sprinkles. Other ideas I had that I did not use (an inspiration for your eclairs maybe) were flavored sugars, almonds, pistachios, raspberries, and poppy seeds. 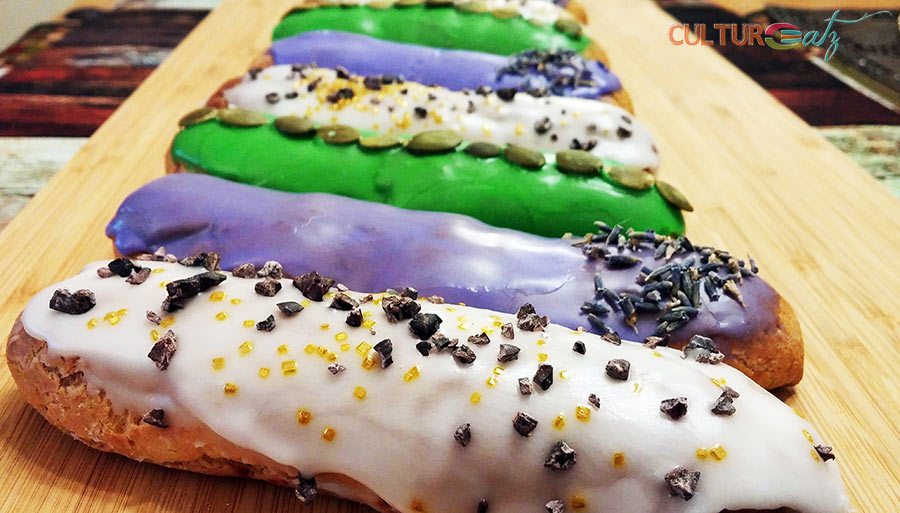 When did you eat your last eclair?

Which new fun toppings would you like to try?

This French pastry is made with pâte à choux, shaped in an oblong vessel that transports whipped cream or custard cream to your mouth, formerly finished off with a chocolate ganache. The new modern French eclair sheds it's ganache coat for gorgeous and artistic edible works of art.

Hey did you know I am now on Youtube? Please SUBSCRIBE! And check out below one of my latest videos