I love discovering new food monthly groups or friendly challenges but this one fits the bill in a whole new way. Food ‘n Flix is a monthly event where a ‘host’ picks a movie of their choice that pertains to food. Everyone watches the movie and then makes a recipe which the film inspired. It can be any recipe.  I annually plan a Food Film Marathon at my house with lots of friends so I know my food movies! 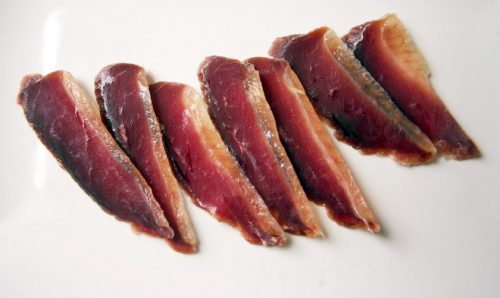 This month’s pick is hosted by Elizabeth at The Law Student’s Cookbook and she picked a really unusual and quirky movie called Delicatessen (one that is on my annual event’s list). I cannot give you a better set-up than IMDB: Post-apocalyptic surrealist black comedy about the landlord of an apartment building who occasionally prepares a delicacy for his odd tenants. 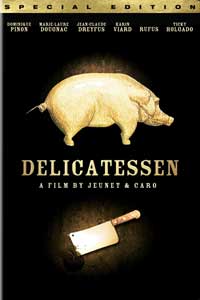 I saw this movie years ago and it was a real pleasure watching it again. It is not a movie for everyone, but it is a beautiful little jewel of the absurd, a black comedy with lots of very unusual hilarious moments.

In this sci-fi war torn city the owner of the local delicatessen is also the proprietor of an apartment building who has a unique way of choosing his tenants. You see food is scarce and sometimes you have to result too…cannibalism for some meat. Don’t worry it is not a horror film and there is only one scene where a wrapped parcel hints at the content. Anyways, the new tenants are judged on what they would look like as a steak in a plate.

The movie focuses on the quirky and very absurd characters that live here, including the new tenant who charms everyone, including the butcher’s daughter. She wants to save her new love so she goes underground to ask help from the obscure vegetarian rebels.

Will the tennant make it to dinner or as dinner? Well you’ll have to watch the movie to find out. 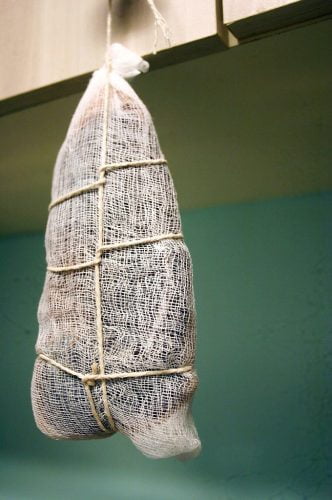 I did not exactly have access to (or want) the main ingredient of this film. So I went with something you would really find in a delicatessen prior to the post apocalyptic world. Furthering my cured meat experience this time I went with duck to make a Duck Prosciutto. It was quite delicious as long as you can cut it as thin as possible slices. Cut a bit thick the consistency is intense for a cured meat. I think the very carnivore look fits with the movie superbly.

An easy recipe for home made Duck Prosciutto. It can be very simple to do cured meats at home.
Print Recipe Pin Recipe