I am sure I have mentioned this before but just in case, I do not really watch cooking shows. So don’t say to me :have you heard of the latest crazy chef “enter name here”? Chances are you will be the first to tell me. I like cooking shows but I have trouble keeping full attention. It is the same with sports on TV. Of course I am aware of the hit shows, take Chopped for instance where a mystery basket of ingredients is given and must all be used in a recipe.

Well that is exactly our theme this month for the Creative Cooking Crew which is hosted by Lazaro Cooks and Foodalogue. I was really excited by this challenge. Give me weird stuff to mix up and I am a happy gal! The ingredients we were given were Granny Smith apples, nut butter, vinegar and bacon. When I read the list I had no idea what to make but I wanted the extra challenge of coming up with a dessert. My creation is a Candied Bacon and Apple Halva with Maple Gastrique.

OK so halva is made of tahini, or sesame seeds, technically not a nut. But it is often sold as a nut butter and I cleared it with the hosts. I adore halva, a candy made of sugar and sesame paste. The store kind had a nice brittle flaky texture which is apparently hard to reproduce at home in small quantities. My first attempt was a fail because I got a more liquid tahini. Make sure to get a thick sesame paste! I approached my second try more like a fudge recipe and it was a success. To that I added some cubed apples and maple syrup candied bacon.

Here is a bit of info on halva, in case you are not familiar with it. This popular candy calls many regions of the world home: Middle East, Asia, North Africa, Eastern Europe and the Jewish world. There are two basic versions to the “paste”: one is made with a nut butter and the other with a flour base. Often nuts, dried fruits, some vegetables, chocolate or seeds are added. The nut butter one has a dry and flaky texture, where as the flour one is moist like a steamed English pudding.

adapted from The Clever Carrot 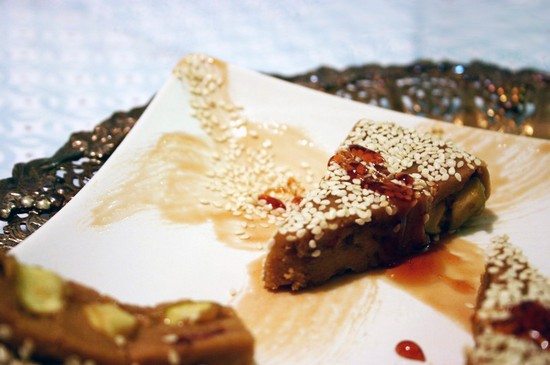 You know sometimes innocence is bliss. I love mixing up ethnic recipes with unexpected ingredients. But of course leave it to me to put bacon in a traditional Jewish or Middle Eastern dessert. This was pointed out to me by my non religious but Jewish friend who happens to be a vegetarian. We had quite a laugh. Oops!

adapted from Your Abu Dhabi Guide

The vinegar puzzled me for a bit. I did dip my cubed apples in a bowl of cold water with a bit of vinegar so they would not oxidized but I did not think it was a big enough effort.

Finally my friend who happens to be a professional pastry chef suggested I make a gastrique. A gastrique is a sauce made of caramelized sugar which has been deglazed with vinegar. Since I used maple syrup for the bacon I figured I would used maple syrup for the gastrique as well. This bacon-maple syrup combo is just awesome, very appropriate as it is Maple Syrup Season. This was actually the theme of a challenge I hosted once on a Daring Bakers.