I am amazed at what can come out of internet friendships at times. And here is another example. I joined a site called Foodbuzz a little while back and of course spent some time getting to know other members. I became friends with Natalie of the Natalie’s Killer Cuisine blog. She told me she is originally from Montreal but now living in Texas. We chatted quite a bit having a common bond.

Now Foodbuzz has a feature where you can update you status. one morning I was eating what we call squeaky cheese here in Quebec. Its actually cheese curds and it squeaks on your teeth when you chew it. Anyways so she comments on my status saying how much she now had a craving for a poutine from her hometown and she no longer had poutine gravy mix. I wrote to her saying I would be happy to send some to her and she should email me.

Well a few days later she wrote saying: “Ever since you said you could send me a few packets of gravy mix, I haven’t been able to get poutine out of my head! My boyfriend has never understood poutine and why everyone loves it ‘up there’. I can’t wait to show him.”…with her address attached.

As we chatted some more by email Natalie offered to send me something in exchange. Next thing we know we agreed to preparing a local food care package with a 10$ limit. I was so excited! My only challenge was finding other Quebec stuff to send within the budget limit. It was not easy as its not like we have a huge choice of things I could send. Can of maple syrup would eat most of the budget, bagels are a bit bulky and would not be fresh lol. So I settled for her also requested Cherry Blossoms chocolates, some Montreal Steak Spice and about 4 packets of poutine gravy mix.

Then I waited. I got her package in the mail way before her (Canada Post sucks apparently) and I could not wait to get home and rip the box open. 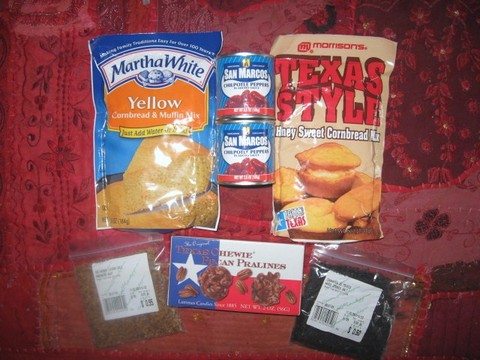 Wow, I guess 10$ goes a lot further in Texas was my first thought. There was so much stuff. Natalie sent me 2 types of cornbread mixes, canned chipolte peppers, 2 types of aromatized salts -jalapeno and hickory wood- and pecan pralines. And boy let me tell you that hickory salt has a delicious but powerful smell. I am keeping it in an air tight container now because in no time it overpowered all smells in the kitchen. I was also quite unsure in what to use it.

I gathered my ingredients: the mix, some water, the hickory salt, the chipolte peppers, and 2 shallots

I emptied the mix in a bowl and added my cut up shallots and a pit of pepper. I also added a pinch of the hickory salt.

I added the recommended amount of water and mixed thoroughly. The mixture went into a greased baking pan and was cooked as per directions.

And here my lunch all ready to be devoured. A couple of sunny side up eggs, some cucumber and 3 small pieces of the cornbread. It just looked so pretty with the red of the peppers and the green of the shallots. It came out flatter then I expected but was easy still to cut and get out of the pan. And the taste: yummy, very smoky from the salt, a little spicy…very nice indeed. I am a sucker for corn bread but its just not something that gets served here.

Can’t wait to do the sweet one soon! Thank you again Natalie so very much. And you’ll get the ketchup chips one of these days lol