My head is swimming. So many booths (more than 550), so much food, and
so little time! And it was much more crowded than yesterday. “You donâ€™t
have to go out for lunch,” I overheard one booth worker say “anything you
want is already here.” Since itâ€™s physically impossible to eat every single
morsel of food on display, Iâ€™ve developed a system that works for me: If the
handout is (or can be) wrapped up, it can go in a bag to enjoy later. That
bag got pretty heavy during my visit.

Today I spent a lot of time in the general food service area. I have a
weakness for Indian food and I loved the chicken samosas. Seeing any kind
of meat in a samosa is already something unusual for me. I also tried
lobster arancini, another twist on an old favorite. Arancini are breaded balls
of (often leftover) risotto, originating from . The local product that
impressed me the most was the blueberry-maple syrup, combining two iconic crops. It has a good strong flavor and just the right amount of
sweetness. Our internationally famous maple flavor shows up in lots of other products too: barbecue sauce, cashews, nougat, chocolate bars, jelly,
vinegar, …. Or just in little sugar packets similar to white sugar, ready to add
to your favorite drink.

Last night the olive oil awards were handed out at a special gala. Out of 105
oils from around the world, 21 were available to taste in a dedicated tasting
area. Olive oil comes in almost as many varieties as wine, and they are
divided broadly into light, medium, and strong fruit flavors. This does not
count the avocado oil from , or the Inca Inchi nut oil from , which
can be used the same way as olive oil.

I watched a demonstration of molecular cuisine. Molecular cooking takes a
very scientific approach to food preparation. In this demo, liquid nitrogen
was used to flash-freeze raspberries and white cranberry juice, making a
smooth sorbet-like dessert. I had heard about this new phenomenon, but
not actually seen it before today. For another dessert, orange jello was
pressurized in a pump (similar to one used for whipped cream) and piped out
in pointy rosettes. Iâ€™ll leave this fad to the professionals – itâ€™s fun to watch
but not practical in a home kitchen.

Note that not all fusion items work. Pork and blueberry sausages, anyone?
Too greasy for me, thanks. The almond and millet cereal – that was for
people, right? Even though thereâ€™s a large bird on the package? It needed
more than milk to be palatable for me.

Unfortunately I had to call an early end to this day. A leaky coffee cup
soaked my (new) blouse and my badge in Irish CrÃ¨me flavored coffee! And
the more I tried to wipe it up, the bigger a mess I made. Oh well, I have to
save something for tomorrow! 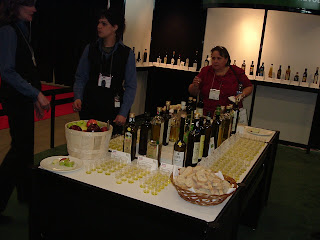 “olive oil” is the tasting table set up. Rachael Ray, eat your heart out 🙂 Besides the oil, there were chunks of bread and apples to accompany the various oils. And around the area were bottles of all the oils. 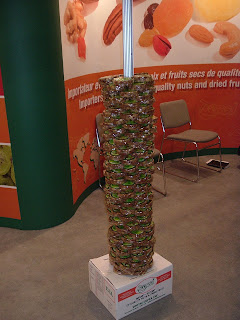 “tootsi 2” is a tower of baby figs. The tower is about waist high! 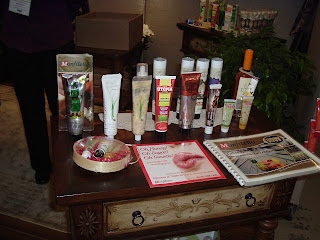 and I have another example of squeeze tubes.

Not everything at the show was food related. There was a fashion show of waitstaff/bartender uniforms, and they didn’t take themselves too seriously, dancing their way around the stage. 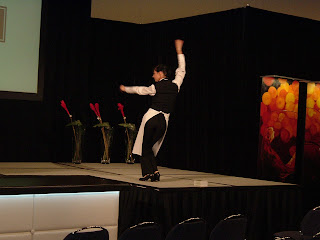