I have the pleasure of posting the first of a series of articles graciously contributed by Rosemary Warren, a very active member of Cheap Ethnic Eatz, who is currently attending the SIAL Trade Show located here in Montreal. Enjoy her words and pictures!
Evelyne
——————————

I have the pleasure of attending an international trade show devoted to food this week. SIAL (Salon International de lÂ´Alimentation) is part of a worldwide network of food shows based in . Originally the show took place every two years, alternating with . Now, we get to host the world every year. And for a foodie city like , this is most certainly a good thing! Exporters come to show the latest and greatest from their countries, looking for sales outlets at the retail and wholesale levels. In turn, a large Canadian contingent shows off exciting items from our home and native land, hoping for a little exposure in a far-off land.

There are several zones at the show, and I started off in the International pavilions. More than 30 countries have signed up to exhibit. Some of the country tables werenâ€™t ready when I passed by, but I did get to check out chocolate from Belgium, rice from Pakistan, creamy candy from Poland, and frozen giant escargots from France (where else?). Grace Foods, imported from , offers coconut water and tropical juices. If you like fresh ginger, you must look for their pineapple and ginger juice – I liked it! From the was something really different for me: a large wafer biscuit to be eaten with wine. Picture a saucer-sized, flavored communion wafer. Some flavors (a total of 4) are suited to red wine and others to white wine. “Take a large bite of wafer,” I was advised, “and a small sip of wine, and enjoy the two together.” (For me, the wine was overkill – the sugary biscuits on their own work fine.) Another novelty for me was Kriek Boon cherry beer from . The brand I tasted is not available yet in the SAQ, it comes from . I am not a beer drinker but this drink really impressed me: itâ€™s fruity and bubbly, it didnâ€™t taste or smell like beer at all. But after the first sip it gives you a gentle shove to let you know — this isnâ€™t plain old fruit juice!

I kept an eye out for trends. So far, one that I saw is with the packaging. Squeezable tubes and pouches showed up on three different booths so far: any kind of sweet or savory sauce, if it can be made very thick, can be forced into a squeeze package. These plastic packages are very compact, easy to store and ship and most are shelf stable. Or the food item can be shipped as powder, to be mixed with water and frozen into tasty smoothies or margaritas.

I also attended a seminar on food trends around the world. Many of the hot buzzwords in your local supermarket – organic, locally raised, Omega-3, pre/probiotics- are just as trendy all over . Not only are there similar government incentives to eat more healthily in (for example) England, there are colored indicators on the packages to tell you how those grams of fats and servings of vegetables stack up against the published standards. Canadians continue to enjoy both and European influences in marketing. One area that is distinctly Canadian is that convenience is taken for granted; it is no longer effective to market items solely as being convenient and practical.

Anything I didnâ€™t like? There was this one pre-made cake: sugar free, gluten free, trans fat free… that was very dense and hard to chew. No, there are some things even chocolate canâ€™t fix. I also didnâ€™t care for the Mochi ice cream bubbles, a concept from where ice cream is enclosed in a rubbery pastry.

Tomorrow I look forward to visiting the booths from and . There will be more than maple syrup Iâ€™m sure! Also, the best olive oils from around the world will compete for prizes. Only one was available for testing today.
—
Rosemary Warren

Right: Cherry beer is from Belgium, this brand is 4.5% alcohol and is similar in style to our local Mort Subite.

Above: Cow Candy is from Poland. it has been around for a very long time. is a lot of milk in these candies, hence the picture of the cow. 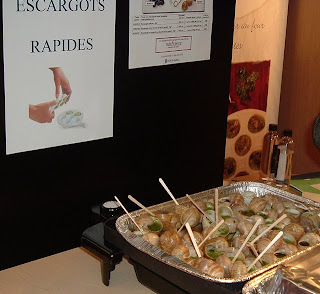 Above: Five kinds of rice from Pakistan.

Right: Escargots are from France. To eat them, you pick the meat out with the toothpick ad then slurp up the hot garlic butter. These ones were frozen individually in the shell.

Below left: This is the wafer to be eaten with wine. (Yes sounds very religious!)

Below right: Examples of the squeeze bottle/packet packaging trend.