Seeing Red Squares in my Plate: in Support of Quebec Student Protests 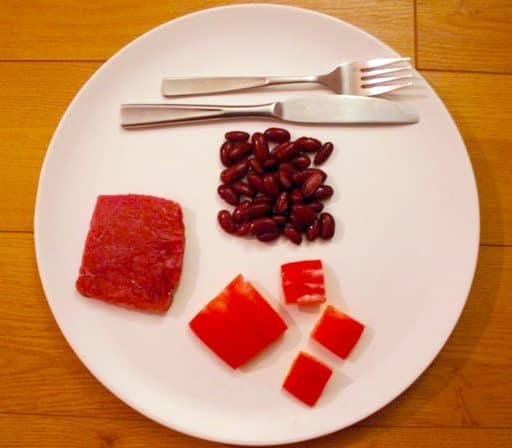 You are probably wondering why on earth I would post such a dinner plate on my food blog. Well this one is not about food but about politics and injustice…that is happening in my city of Montreal right now. Maybe you will decide to skip reading this post, please don’t. Maybe you will read it and be upset at me. I’ll take that chance. Maybe you will sympathize. I know my blog has a reach with readers around the world and if I inform people outside of Quebec well then I did my job.

Montreal has been under attack for the past 3 months, since February 13th 2012. Following a proposed tuition increase of 75% over a 5 year period, then reworked to 83% over 7 years. Students reacted against this raise. The public symbol of support for the student protest became a felt red square that many pin to their jackets or sweaters. Hence my dinner plate!

Quick resume:
On February 13th the first university went on ‘strike’.  By the end of March 300,000 students joined in the strike. For the past month, there has been organized manifestations EVERY DAY. Most were peaceful…some not. Radical groups have taken advantage of the situation to vandalize the city, including one morning where our entire subway system was shut down due to 3 gas bombs placed by radicals. But there has also been a lot of police brutality towards peaceful protesters. All discussions between the student associations and the provincial government have ended in rejections. Both parties are stubborn. On May 18th a bill was passed, Bill 78, “to prohibit freedom of assembly, protest, or picketing on or near university grounds, and anywhere in Quebec without prior police approval“. If illegal protests happen then huge fines would be given. Of course this all led to a very violent manifestation on May 19th where 8,000 people marched in open defiance of the provincial government’s emergency law, initially in a peaceful manner. Some radicals turned it into a public bonfire. Police fired rubber bullets, noise bombs and tear gas into the crowd. Many people claim Bill 78 goes against Human Rights and Freedom of Speech, and accuse the police of using excessive force on the entire crowd. Many people were arrested and injured.

I am sorry but why do I suddenly feel like I live in a third world country where the rights of the people are crushed? I agree the proposed raise in tuition is insane and I support the students. I don’t disagree with a reasonable raise however. Yes we have the lowest tuition fees of the country. But what was proposed was a successful attempt of putting in debt the next work force generation. The media is trying to make the general public put the blame on the lazy, childish and uncontrollable students. But no one seems to want to discuss the fact that the federal government had already greatly subsidized the provincial government to cover the tuition raise. Nor does anyone want to hear about the interests the government make off the repaid loans that is not reinvested in the education infrastructure. Where did/does that money go?

I happen to have a few very close people in my life that are students on strike, some protesting, some not. I can tell you first hand though that most are not sitting at home enjoying a 3 month holiday. They are stressed, unsure of their future, have no idea if they suddenly have to go back to school every Monday should an agreement be reached. They cannot get summer Montreal jobs because employers won’t hire someone who may quit any time to go back to class. The winter semester so everything remains up in the air.

I agree with the students and the manifestations, the peaceful ones. I do not support any act of violence. But history certainly shows us the freedom has a price tag: disruption. Ever heard the saying “To know peace you must know war”? I am ashamed of radicals ruining the reputations of the good protesters and I am ashamed by my government’s reaction. I am angered at how long this has been going on, I am tense and stressed every time I hear about this ongoing protest. I am so angry at some people around me who destroy the students and insult them because “I worked and paid my schooling when I was young, they are lazy” or “they disrupt my normal routine of getting home on time because of a protest”. I have witnessed in 3 months only one diplomatic discussion at my job where people had varying opinions but took the time to listen respectfully to the others person’s view. I am not the most political person; I avoid big political discussions normally. Why? Because every argument I made when I attempted to discuss was rejected automatically and people jumped down my throat. Excuse me but who is being childish? Let’s all just shut up and tell the students to shut up so we can let the bullies do what they want. I am not staying who the bully is, several people play that role.

It’s not about the tuition raise anymore. It’s about seeing how little is done or how little some care about the bigger picture down the road. Don’t you want the right to express your opposition in a safe manner where you will be listened too…at home, at work, at school, with friends, or by your government? Because right now I feel like I am in Tiananmen Square, the 2006 Iran student protests and the recent Chilean Education Conflict.

I want things to be peaceful and safe for everyone. I want a resolution to this as soon as possible, like everyone. I am open to respectful differences of opinion. I want the opposing parties come to a compromise and take responsibility, each, for some bad decisions. But mostly I want to feel like I am allowed to say what I want without fear of reprimand! Right now I think many of us just don’t feel respected……at home, at work, at school, with friends, or by our government.

Finally International papers and news medias are starting to talk about the situation. Public figures are showing their support. You may thing this post only affects me but YOU are all affected by this. It’s all our freedom of expression being affected. Some public supports….

– On the season finally of Saturday Night Live this past weekend Mick Jagger chose Montreal-based band Arcade Fire to be his backup band…Arcade Fire wore red patches in support of the Quebecois student protest on SNL. Jagger wore a red shirt to get into the spirit.

– Michael Moore tweeted about that moment: “The band Arcade Fire wore red patches in support of the striking students in Quebec, one of the most amazing mass protests of the year.”

– Director Xavier Dolan was seen wearing a red square in his lapel as he arrived at the 65th Cannes film festival in France.

A few links if you want to read more on the issue.

Ten Points Everyone Should Know About the Quebec Student Movement