I have been so busy with the holidays and cleanig I am only writing now about our Chritsmas dinner that occured Dec 2th lol. We were 31 members of the dinner group rejoice in holiday spirit at the Korean Restaurant Atti.

All pics were taken by Bernard Reischl

Now the first comment I heard over and over was how nice this place was, how beautiful the decoration was and how swank it looked compared to most places we go. Now we do go to nice places but this was a notch higher. I had noticed myself on my first visit. Another unusual item found on the tsable is a buzzer to call a waiter. That is way to cool and modern lol. We were nicely and evenly spread out over 4 tables settings.

It was a special dinner as well for three reasons. One was a guest member in town from Boston. He is a meetup memner who joined and happened to be in Montreal for our dinner. Thanks Jackie it was a pleasure to meet you. And I got to meet dear Claudia. She is a member of my group but we had yet to meet in person. But we have had a many many funny and foodie email exchanges. Finally, in the last fund raising dinner for Kiva, we raised over 120$ that night from those present. Wow! 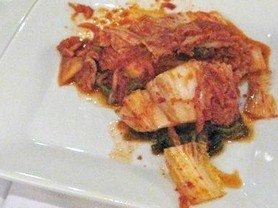 I had already had negotiated a set menu with the owners. We had a choice ofÂ 4 main dishes, a soup and traditional accompaniments, as well as exotice ice creams and tea included for 20$ before tx and tip and booze. First we had our soup which was a very ligh bouillon with bean sprouts. It was a real palate cleaser. This was followed by two accompaniments: traditional kimchi salad and a potato and apple salad. But yummy but kimchi is an acquired taste and you have to love spicy stuff big time. 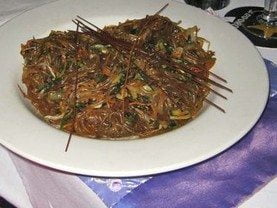 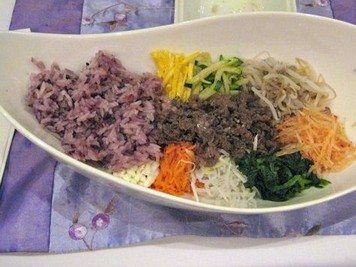 Here are two of the main dishes. On the left is Japchae, a plate of sweet potato noodles cooked with stir-fried vegetables and beef. This is what I had and its very good. The second most popular choice was, on the right, Bibimbap, aÂ rice topped with seasoned vegetables and chopped beef. Not pictured but also in our set menu was Bulgogi Deopbap, thinly sliced or shredded beef marinated and cooked on a grill with rice, and Doenjang jjigae, aÂ soup of bean paste, tofu, and vegetables.

Now the real attention steeler of the evening was dessert. We had 4 flavors to try: green tea, sweet red bean, ginger, and black sesame. Yes this is the one above and it is black, black, black. But it was genrally the favorite as well. It had a lovely roasted taste to it. This was a real find.

So the overall impression: it was very good. The restaurant is so ideally located right downtown. The service was truly impeccable and prompt. We got a lot of explanations when we asked, all given with a smile. From the feedback I got that night and afterwards everyone enjoyed their meal. I unfortunately have to differ here. I have been to several Korean restaurants so I found the foodÂ by Korean standards bland and sweet. All my past Korean dinning experiences left my palate a bit culture shocked. It just was not the case here. The food is good, but it won’t knock your ethnic socks off. Its like Americanized Korean if you know what I mean. 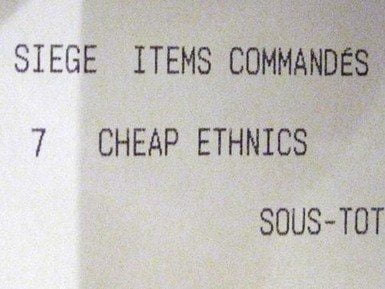 A funny final note on the note he he. They had entered us as a group in their computer and we were apparently labeled as CHEAP ETHNICS in the reservation title. That is too funny.Â Ah yes there was one more find that night. Our Bostonian friend Jackie introduced us to the traditionalÂ Korean alcohol called Soju. We got to have a taste at our table. You drink it straight like Sake. It tastes like diluted vodka but with a bit of a sweeter taste. We asked if it was sold at the SAQ. At the time we were told it has just been introduced at Signature and Selection stores only and only for the past 2 weeks. I actually did go out to find sopme and its very reasonable. A 375ml bottle will run you $8.75. Look for this at the SAQ: