If I was to describe this place with 1 word it would be: Novelty.

We went to the Homard des Iles MÃ¼vbox counter in the Old Port. I can hear you asking already: MÃ¼vbox what? Imagine a shipping container used on boats. Now imagine it being turned into a fast food counter. Its a pretty impressive concept. Its the brainchild of Daniel Noiseux, founder and owner of the Pizzaiolle restaurants.

As far as I can tell its the only in the world, for now. And this one specializes in seafood, but it is fast food. What is on the menu? Lobster rolls served in a plain hot-dog bun, duck pizza, clam chowder and lobster pizza are the starts of the menu. Everyone thought the food was good except for the Lobster pizza. Duck pizza got high ratings, lobster rolls were good. Two people had it and both were of the same opinion…it was weird and a bad combo with mushrooms. Yes it is real nice and fresh lobster meat. Chances are you may still have room after too.

You can order the special #1 which includes clam chowder, a lobster roll, chips and a soft drink for $14.95 (when we went). So add the tax to that and its not so cheap, especially when you get your meal served in a carton box. But, again, it is a novelty and it is located right on the Old Port. 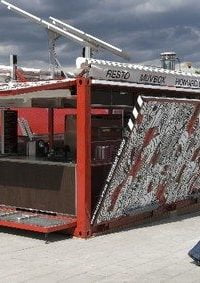 Opening up in the morning 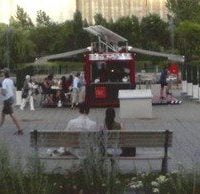 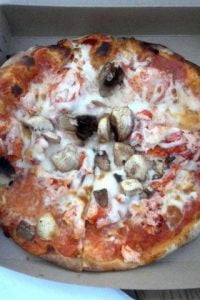 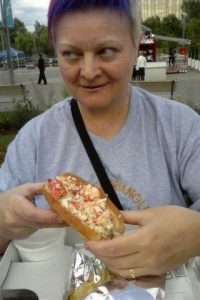 You can see above the pictures. Thank you to Victoria for graciously modeling the lobster roll

Check out the promo video of MÃ¼vbox on Yout Tube where you can see the container being opened and set up.

Overall concensus: good enough food, would not go back twice…but definitely worth try once for the heck of it!