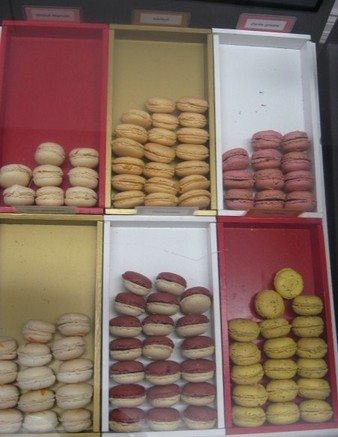 As mentioned in my review of La Maison du Macaron in Montreal, I promised to do a follow up post discussing the history of these angelic treats, as well as give you a recipe for making them.

Really it seems the foodies world is in a Macron attack. Everyone is talking about them, everybody wants to learn how to make them, everyone is fearful even of not being able to master them. You would think they were just inveted. No so! Macarons were actually invented in Italie during the 8th century and brought to France during the 16th centrury by Catherine de Medici, a foodie of her time, for her wedding to the Henry, the Duc or Orleans and future king of France (Henry II).

The recipe gained popularity and was particularly a common confection in nunneries. Louis XVI also received macarons as a gift for his wedding. Each region in France further developed the recipe with a well garded secret twist. But in essence the recipe remained the same untill the 20th century.

Today’s macaron was created by Pierre Desfontaines, grandson of Ladurée, in the 1930s when he had the original idea of sticking two macaron shells together with a creamy ganache as filling. Today chefs in Paris and around the world try to outdo one another with the best macaron ever. Want to give it as shot? Here is a basic recipe. But firstÂ let me share with you the secret: let the macarons rest 24hrs after they are assembled to let the flavors of the ganache infuse the relatively bland macaron.

Procedure
1. On three pieces of parchment, use a pencil to draw 1-inch (2.5 cm) circles about 2 inches apart. Flip each sheet over and place each sheet on a baking sheet. 30-50 macaron sandwiches with this recipe.

2. Push almond flour through a tamis or sieve, and sift icing sugar. Mix the almonds and icing sugar in a bowl and set aside. If the mixture is not dry, spread on a baking sheet, and heat in oven at the lowest setting until dry.

3. In a large clean, dry bowl whip egg whites with salt on medium speed until foamy. Increase the speed to high and gradually add granulated sugar. Continue to whip to stiff peaksâ€”the whites should be firm and shiny.

4. With a flexible spatula, gently fold in icing sugar mixture into egg whites until completely incorporated. The mixture should be shiny and ‘flow like magma.’ When small peaks dissolve to a flat surface, stop mixing.

4. Fit a piping bag with a 3/8-inch (1 cm) round tip. Pipe the batter onto the baking sheets, in the previously drawn circles. Tap the underside of the baking sheet to remove air bubbles. Let dry at room temperature for 1 or 2 hours to allow skins to form.

5. Bake, in a 160C/325F oven for 10 to 11 minutes. Use a wooden spoon to keep the oven door slightly ajar, and rotate the baking sheet after 5 minutes for even baking.

6. Remove macarons from oven and transfer parchment to a cooling rack. When cool, slide a metal offset spatula or pairing knife underneath the macaron to remove from parchment.

7. Pair macarons of similar size, and pipe about 1/2 tsp of the filling onto one of the macarons. Sandwich macarons, and refrigerate to allow flavors to blend together. Bring back to room temperature before serving.

Here are some ideas for the ganache and variations from Helene Dujardin: