I am by no means a beer connaisseur but I recently went to BiÃ¨res et Compagnie with some friends and, as the name suggests, there is a lot of beer on the menu. Actually they claim to have over 100 beers. There is a seperate menu just for the beer.

I decided to splurge and try 1 expensive beer. I chose Le Fruit DÃ©fendu. It is a Belgian beer brewed by the famous Hoegaarden Company. This has an 8.8% Vol. It is a complex beer made with a mixture of malts and spiced with coriander. It is deep red in colour, rich, sweet, malty and full bodied. Originally it was brewed for a local town festival, it is now apparently a classic export worldwide. This is more commonly known as De Verboden Vrucht by the Belgian’s and Le Fruit Defendu by the French. 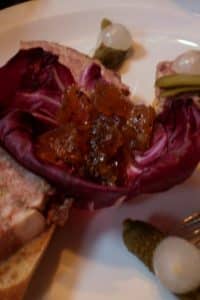 As I said it was a treat because I paid 13$ for a regular sizer bottle. Obviously it was my only drink of the dinner. I was kind of sold when I read the ‘spiced with coriander’ part. It definitely had a rich color to it and boy did the taste pack a punch. At 8.8% you really feel it and the taste is strong yet very unique. I can’t say I tasted the coriander but it had more of a hem taste to me. I may noth have had the papalet to really appreciate it but it was an interesting experience for sure. It really did feel like a special beer to taste.

And it went very well with my pheasant terrine with apple and mint chutney. I decided to go for an appetizer and a dessert. It was not my first time here and I do enjoy going once in a while. They specialize in game. Here you can try caribou, moose, duck, wapiti, ostrich, deer and more in unpretentious burger and sheppard’s pie presentations. It maybe a tiny bit more then what I would consider a cheap eatz but it is totally worth trying once.

Oh…the dessert. So gooooood. I had a New Castle beer infused cake with a sucre Ã  la crÃªme coulis. Too die for!