Got to bring something sweet for a celebration? These vegan no-bake Greek Almond Biscuits, called Amigdalota, grace most wedding and happy event’s table in the Greek Isles.

It’s Food N’ Flix time and this month we are singing our way to the kitchen after watching the film “Mama Mia! Here We Go Again”. To represent the movie, I prepared a no-bake version of this Greek Almond Biscuits recipe, know in Greece as Amigdalotas. These sweet protein bites will have you singing their praises in no time. 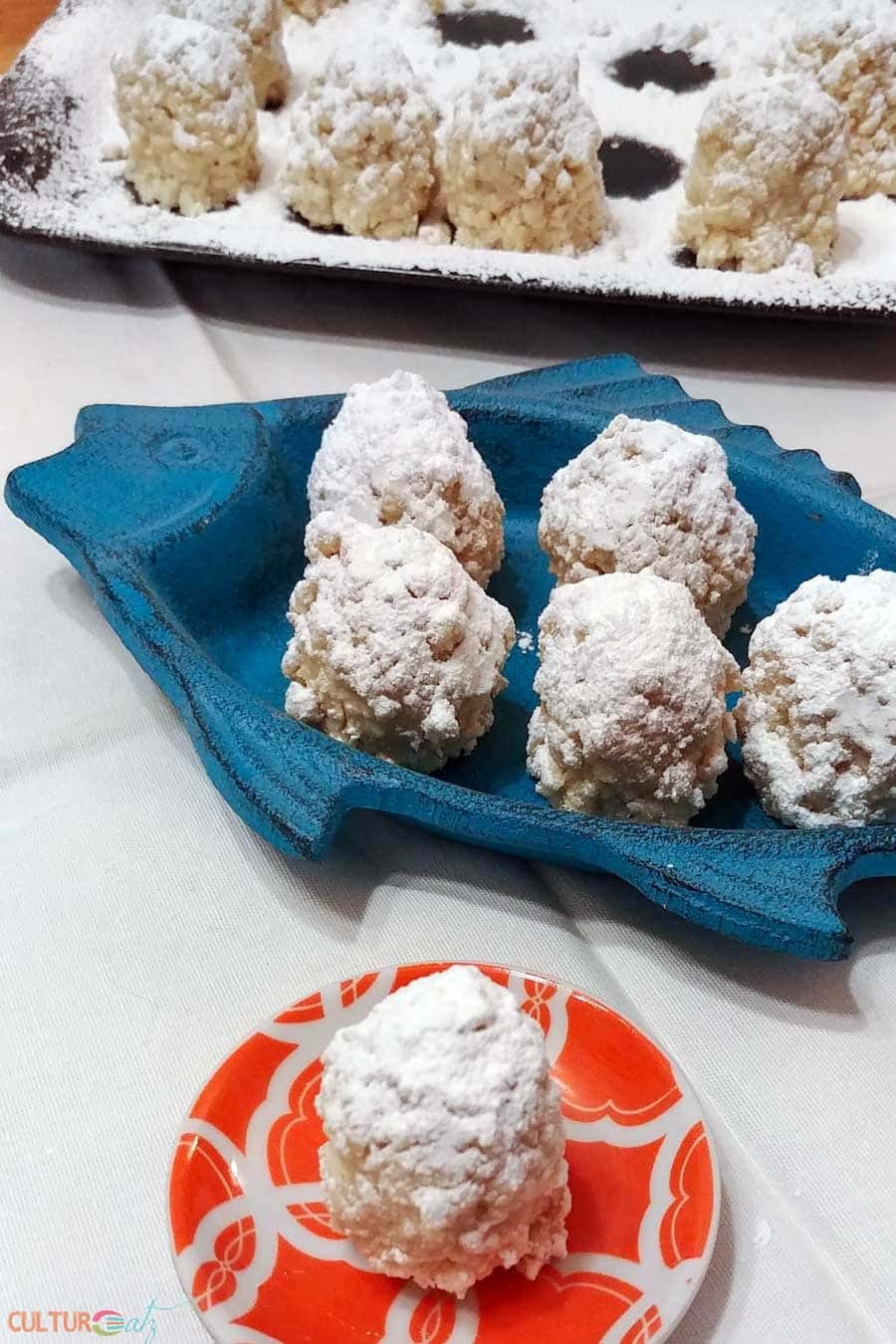 This month’s movie selection was Mama Mia! Here We Go Again, a 2018 jukebox musical romantic comedy with a gazillion famous actors in it, including a rare appearance by Cher. And of course, as in like the first movie, the story is intertwined with all the musical catalog of the famous band Abba.

This time we travel through time, both past and present, where we find out how Donna first made her way to the Greek Isles and encountered the three men who could be Sophie’s father.

In the present, the whole gang is back in Greece to support Sophie’s reopening of her mother’s hotel, who passed away a year earlier. There is a lot of intertwined adventures and love stories from the past and present that make up the movie, but it all ends with a big reveal by Sophie which I will not spoil for you have have not yet seen the movie.

If you like Abba and romance plus female-oriented movies, this will totally be for you. Alas, it was not for me but I had actually seen it before it was on the schedule…so curiosity still got the better of me lol.

Since the movie is all about various kinds of celebrations or hard moments when close ones come together, I thought to prepare something sweet and traditionally served at gatherings, a recipe truly from the Greek islands.

The island of Kalokairi in the movie is fictional but it was shot on Skopelos, in the Sporades islands. A few Greek islands lay claim to Amigdalotas, including this area.

The Greek almond biscuits were the perfect Greek recipe for this month. Almonds are commonly found in sweets in Greek desserts. That is because almonds are a symbol of happiness, prosperity and good luck, especially at Greek weddings and baptisms.

Don’t you love exploring the world and culture through cookie recipes? 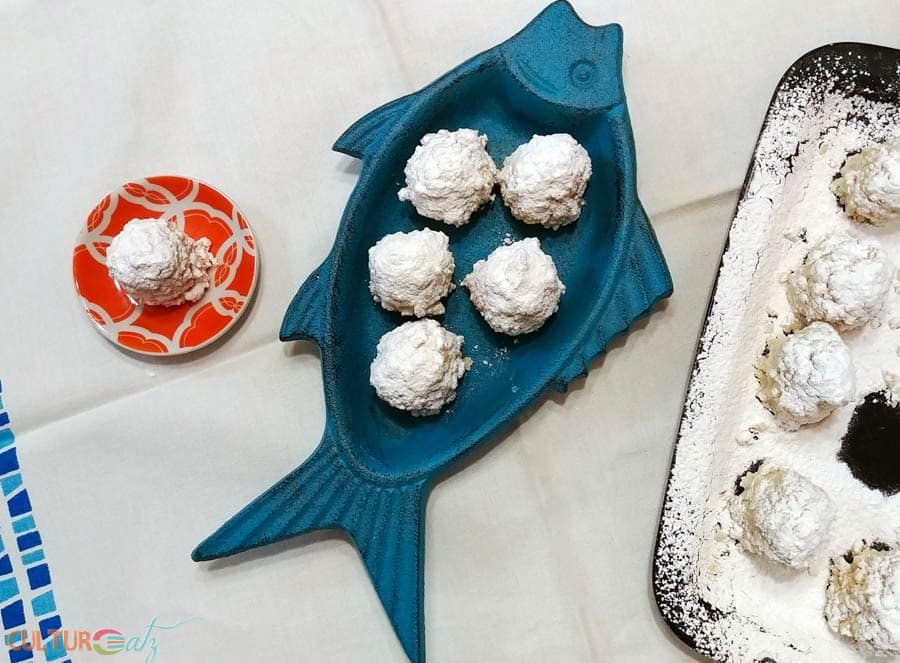 I used this no-bake Amigdalota recipe which I believe is probably closer to the original preparation method. Many modern recipes include egg whites and are baked.

My version is simply making syrup but cooking water and sugar, and mixing it in with ground blanched almonds. And one must not forget to add a touch of orange blossom water to add a delicate floral note.

Once set, you dust the mounds with lots of icing sugar. They are somewhere in between coarse marzipan and an amaretti cookie, almost like a sweet rather than a cookie. And addictive one!

Food ‘n Flix is hosted this month by my friend Wendy at A Day in the Life on the Farm! In this monthly group, a host picks a movie of their choice that pertains to food. Everyone watches the movie and then makes a recipe which the film inspired. It can be any recipe you want.

Or in English, until next time. On a bittersweet note, this will be my last Food n’ Flix participation. I have been a part of this group for a long time and you can find many Food n’ Flix recipes on my blog, and hosted so many movies over the years too.

I have so many fond memories of this group and it has been my favorite group challenge. But it is time to move for several reasons, I won’t go into them. But I wish a long life to this awesome gang! 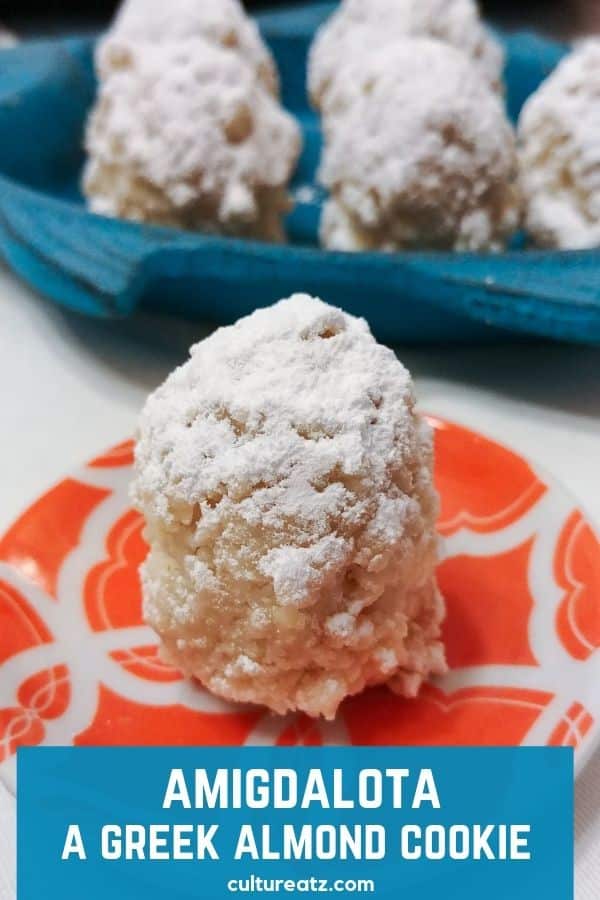 Pin it HERE for later!