Exclusive visit of the Danone Headquarters in Quebec

On August 16th 2011, about 14 food bloggers went on a very special journey. Seated comfortably in a luxury bus we enjoyed catching up since our last crossing at past events as we we driven to the Danone Headquarters located in Boucherville, about a 30 min ride outside of Montreal.

Once on site we were greeted by a single group of paparazzi photographers….this was to be quite the media event. Once in the building we enjoyed a cocktail with snacks as the VP of Marketing chatted with us about the company’s history, current affairs and of course the reason why we were there: to represent Canadians as taste tester ambassadors for an exclusive avant-premiere tasting of the 3 possible new Danone Dessert flavors which are currently suggested to the public via the Activia site Vote for the new Activia Dessert Flavour.

Billboard example with my pic

If you vote, and you should, you can see the current voting results, get a coupon and even be the star of a billboard for a few seconds with your picture saying which flavor you voted for (must be a Canadian resident). So what were the flavors? Ah, you will have to be patient a tad longer as I want to take you on a tour of the production line of the Danone plant.

After the employees so lovingly covered us in scrubs, hard shoe covers, a hair nets, safety glasses and had us whas our hands as if we were surgeons going into the operating room we were ready to begin our tour. Do keep in mind such procedures are normal in an agrifood production plant where everything must remain as clean and sterile as possible. But we looked like idiots and I have to photo to prove it. So HAWT!

I am ready for my close up!

The production plant was huge. We saw all the different stages of the making of a yogurt, even the top secret areas (no cameras allowed) and then saw the final production line. Let’s look first hand as to how yogurt gets packaged… 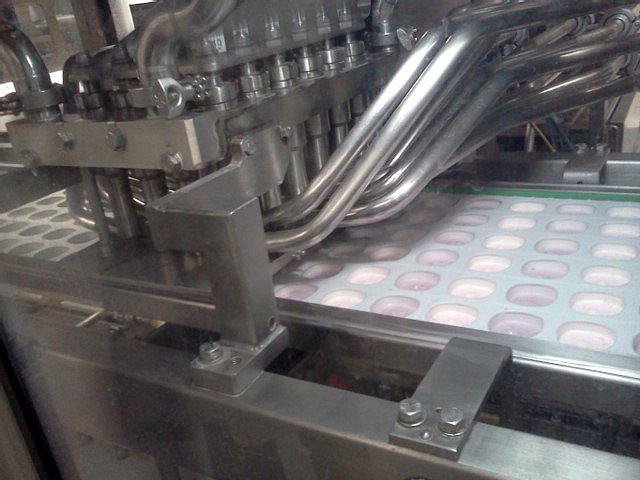 Filling the cups with yogurt 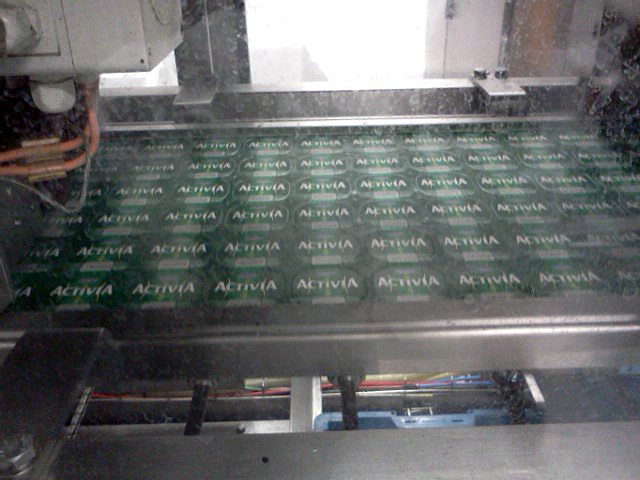 Putting on the covers 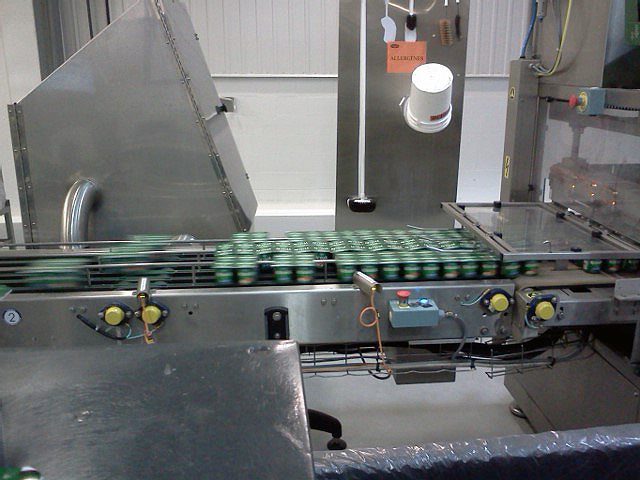 And finally boxing them up to go in the fridge

We did have a very special treat: we got to eat a yogurt right of the assembly line. It really does not get any fresher than this, well besides jumping into the vat of yogurt itself! Below you can see Janice of Kitchen Heals Soul enjoying her yogurt and here is a pic of mine: strawberry and rhubarb, delicious.

With our tour done we were whisked away to a conference room for our tasting session. Because we were a big group we were divided into a French group and an English group. I went into the English group and I LOVED the Danone employee who guided our tour. Her job is to invent and mix the flavors. How freaking cool is that!

The table was set up with each place containing a labeled white container indicating the flavor and one presentation plate giving us a visual of the flavors. I never ate a product from the Active Dessert line before but I fell in love with it. This line tastes rich and is really satisfying, like if you ate a real high calorie dessert, except it only has between 90 and 120 calories per 100 gr. Let’s move on to the taste test…

Angel Cake: when this flavor was mentioned I don’t think I was the only one with a puzzled look on my face. What are the flavors of an Angel Cake? Apparently it is Tahitian vanilla and coconut. Yogurt flavors are made like perfumes with a high note, a low note and a lingering one. Here you get the vanilla at first and the after taste is coconut. The flavor here invoke an image of lounging in a hammock but a Tahitian beach. For me it tasted like a fancied up vanilla yogurt.

Caramel Apple Pie: this was the most recognizable flavor, the one we could instantly identify with. There were bits of apple and raisin and the taste really was that of caramel apples spiced with cinnamon, nutmeg and all spice. The last note was the dough of the pie crust. YES you actually tasted the dough…like a nice soggy part. Eating this flavor really gave me the satisfaction of having eaten an actual slice of pie.

Caramelized Pear: I thought this was the most original concept flavor. I think pears are becoming more and more popular in baked goods. Again we find chunks of caramelized pears in the yogurt (not enough at least in my cup) and then a too subtle taste of pears, they should up it. After the initial taste it ends with a lovely hint of the flambeed caramel. But really the pear flavor part needs to be punched up a bit.

Now we were asked which one was our favorite flavor and which one did we thought the customer would go for. In my group we unanimously agreed the Caramel Apple Pie was the best flavor, the whole slice of pie experience was there. As for what we thought the public would choose….well if you paid attention earlier in the blog you can figure out my answer, go sleuthing! Which flavor would you Vote for?

As a food blogger, when you get invited to such media events, you wonder how real the smiles are and how perfect everything looks just for us sometimes. Well I can honestly say at this event I got nothing but genuine care when it came to making a quality healthy product without cutting corners. The claim to offering a stimulating work environment where enthusiasm and openness make a real difference on the job really seemed genuine. And I have a good instinct for such things. Make sure to go LIKE the facebook.com/danonecanada page.

Thank you Danone and Enzyme.ca for this opportunity.