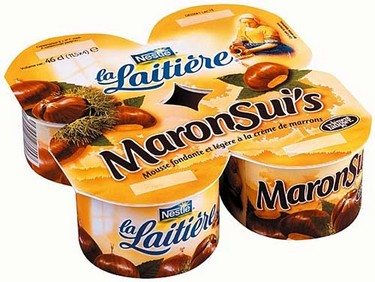 Once more I start my blog with a mention of my boss. What can I say, he is from France so we talk about food a lot at work. So once he mentioned to me this chestnut mousse called Maronsui’s. He raved how it was to die for. I was skeptical.

The reason we had even started that conversation is because of my friend Carina who is a flight attendant for Air Canada. She had once brought back for me chestnut yogurt, again so good and actually served in individual glass jars. Well Carina was going back to Paris for work so I asked her to bring me back some of that yogurt she had brought for me a previous time. She did, and ignorant of my Maronsui’s knowledge…she gave me one as well that was in her fridge.

So I had it last night. Oh…..My….God!!!! It is unbelievably good. It really is to die for. After the last lick I searched the net for a recipe since one cannot find it here. there are a lot of various, somewhat similar recipes. But I fell on one that was exactly as the ingredients on the package. I am translating it for you as it was published in French. I did bastardize it to North American ingredient availability.

Preparation:
– Approximately 30 minutes before starting the recipe, put the cream in the freezer and the beater and your bowl in the refrigerator.
– Sprinkle the gelatin over 1/4 cup of cold water and let stand about 1 minute.
– In a small saucepan, heat on low your chestnut spread. Once hot, add gelatin and stir well. Let cool.
– Pour your cold cream into the bowl. Then gently beat cream with electric beaters. Start on low speed and increase speed as it thickens.
– Stops when the whipped cream has thickened and clings to the beaters. Don’t forget to add your vinegar is using whip cream! Be careful not to beat too long, otherwise you will get butter.
– Gently stir your cream whipped cream and chestnuts.
– Divide the mixture into 4 ramekins.
– Cover with plastic wrap and refrigerate 2 hours minimum.

Don’t know what chestnut spread of paste looks like in the store? Look at the two images below for help.