What happens if you combine two fun foods like cola and anything fried? Then add some chopped sour cherries? Voilà, a deep fried coke with sour cherries treat!

The challenge: make a recipe with Coca-Cola and cherry. Yep soda, pop, cola, coke. A tough one indeed. Then inspiration struck. Let’s try the crazy sounding Deep Fried Coke that is served at fairs and carnivals. And to complete the requirement I just tossed in some chopped cherries. The result is nice puffy beignets of Deep Fried Coke with Sour Cherries.

Deep Fried Coke made its debut in 2006 at the State Fair of Texas. The recipe was a hit, as crazy as the idea may sound. Basically, it is a beignet (fritter) batter which uses Coca-Cola as a liquid instead of water and/or milk.

The taste is not as ‘coke-y’ as I had expected but you get a hint of the soda flavor when you bite into these rather yummy treats. It was a fun recipe to play around with. 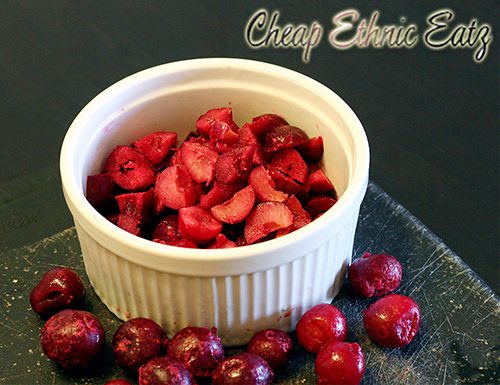 I am not a fan of maraschino cherries and fresh cherries are very much out of season right now. So I decided to go with sour cherries. I discovered these in the freezer section of an ethnic grocery store in my neighborhood. One bite and I just fell in love with them.

I will sometimes defrost a small bowl and eat them alone. I thought their tart flavor would balance out the sweetness of the batter nicely. They are said to be good for sleep problems as they have high levels of melatonin, and others say they also have anti-inflammatory properties. 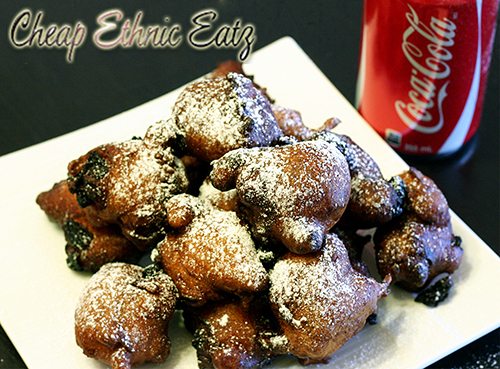 Have you ever tried deep fried coke at a carnival or state fair?
What do you like to eat at such events?
And what is your favorite kind of fun fried food?