Last Saturday, March 14th was the Cheap Ethnic Eatz dinner groups 2nd anniversary. And boy was it ever a party! 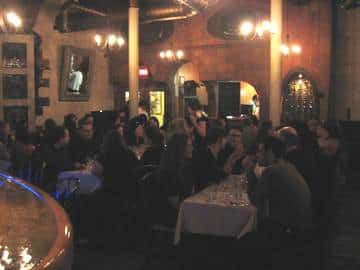 The party was held at a previously visited restaurant called L’Ambroisie. I won’t go into specific the details of the actual place in this blog, I have already before from our first visit so…here is a link to that blog. So I got there a bit earlier to set up with a friend and I was very happy to be greeted by the owner, Stuart, and the head waiter with whom I dealt with the last time, Kevin.Â  I set up a little greeting table at the front with a sign-up sheet and a martini in hand. The big stressful question I had for weeks was going to be answered soon: how many out of the 93 RSVPs will actually show up. Well I was more than pleasantly surprised by that final answer: 85 people showed up. Wow, 85! That beats my highest yet attendance by far!

As people arrived a buzz really started building and everyone was chatting either at the bar or at their chosen table. Except for my parent’s delayed arrival (car problems) I could relax finally….my reputation with the restaurant was safe, I filled my seats even better than expected. I also had a few personal friends attend the evening which was really cool. I joined my table and the dinner started. I had chosen a 3 course meal dinner menu with/salad, 3 choices of main dish and a dessert with coffee/tea. The soup was outstanding: a carrot, orange and rosemary soup.Â  Main meals on the whole were very much enjoyed.Â  I did expect the food quality to be a tiny bit lower because it was a huge group but I was very happy to find it above my expectations. Althought go in a small group a first time to really appreciate the cuisine. I had porc medallions with brie and a port sauce. And dessert was the much anticipated one I had had at the first visit: a Khalua and chocolate mousse cake…SO GOOD. The coulis as so good to that here you see Raquel helping herself to my plate to finish of my coulis. 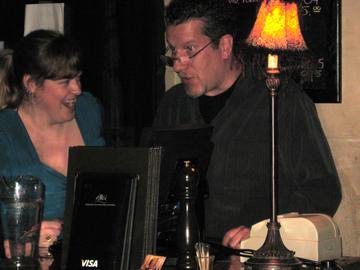 It was just amazing seeing the entire restaurant filled with members. The chatter noise level was high and jovial throughout the dinner and everyone seemed to enjoy themselves. Just before dessert I did my little speech in front of everyone. I talked about he last year of the group, highlights, made jokes (people actually laughed) and was getting addicted to having a microphone in hand. Did I mention I am not afraid of speaking in public haha? Well for those interested in my speech it may be on youtube at some point as Berny took a video of it….in case you have really nothing better to do for 10 min. Anyways I had also prepared a little something for Stuart, a thank you memento, but the 2 times I tried to get him up he vanished! I later found out he hates having so much attention. I finally got a little 1-on-1 to give him his ‘award’ and apparently a pic was snapped of it lol. 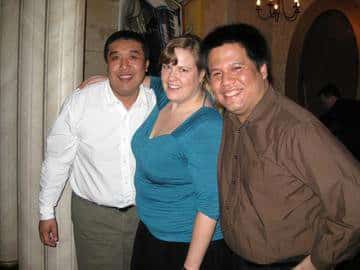 And of course I thanked my assistants – Agustin, Olivier and Sharon -, 2 of whom were present. See here is our pic together lol. As the dinner winded down we got the dance floor ready. It turned into an instant club right away as there were like 3-4 good songs in a row. We were about 30 on dance floor. Then we got a bad song and 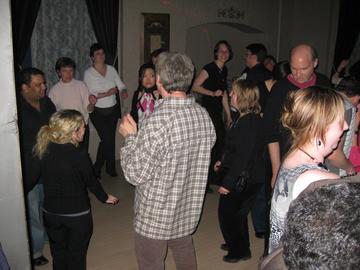 the dance room EMPTIED, in a flash. Oh no! Well it got better but pleasing everyone with a dance list is impossible. We did go back to about 10 dancers for a couple of hours. At around 1am the last ones there, about 8 of us,Â closed the place and left. This was actually a bit later then I even expected since people often leave after the food.

I said my goodbyes and thanks to Stuart, Kevin and staff. They were very pleased with the evening as well and we are invited back for an evening on the terrace this coming summer. An offer I am sureÂ I will take up…stay tuned.