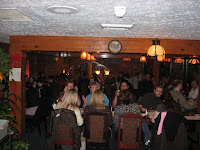 Yeah I know. Its close to a month since the 1 year anniversary dinner and I am writing the blog now. Life has been crazy. But here we go. 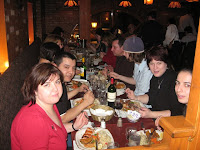 So March 11th was the 1 year mark since I started this dinner group. And I celebrated that event with 48 fellow members of Cheap Ethnic Eatz for a wonderful dinner at La Caverne Grecque on Prince-Arthur. It was quite hard to find a restaurant to accomodate such a big group but yet for a very reasonable price. And that actually made me a bit nervous to get such a great deal…a full table d’hÃ´te for $17…at a place I had not tried in years. 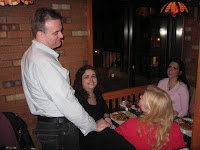 Well let me say everyone, especially myself, was very pleasantly surprised. The meal was delicious. We started of with shared platters of pikilia which really opened up the appetite. Next we were served a fresh salad. The main meals was a choice of chicken brochette, salmon, or fillet mignon brochette. I had the filet mignon. I asked for medium-rare and it was served perfectly as requested. The meat was so flavorful and tender. I was really impressed. Don’t know if anyone ordered the salmon but the chicken was very good as well. The only disappointment was dessert. We all expected to receive some baklava but we were served a somewhat still frozen commercial cake for groups. But over all it was excellent. 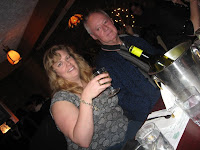 Its always so amazing to see so many people join the dinners and 48 people coming to this one was heart warming. I was accompanied by my dad, his first time at a dinner. It was so great to see so many faithful faces and many new ones too. I first thought of singling out people but I would certainly forget some. So I say Thank You too all my ever present members, my assistants, and my friends. You know who you are. Lets have many more too come.

Again, if you are a big group and look for great food for a great price…try La Caverne Grecque.

Thank you again to Bill who took care of our reservation and our group.
La Caverne Grecque
105, Prince-Arthur East
514-844-5114