Yes, I even managed to get a Thursday’s Thingamajig post out of my trip!

I was quite amused with the space food displays at the National Air and Space Museum, particularly with the soft drink cans. Think about: someone actually sat down and thought up of a way to drink soda safely in space. Safely? Did you not know opening your normal can in a spaceship could be a question of life or death? The science info was hard to find and I don’t claim I would a science court case with my findings, but…

– If you had a coke can outside the space ship the pressure of space and your can would not be compatible. So uncompatible your can would explode into tiny aluminum shrapnels. Imagine now these fragments flying and damaging shuttles or space suits, not a place you want a tear in your outfit!

– What about opening your can in the shuttle? I am copy pasting this one…If you sensibly open the can inside the pressurized cabin compartment then the gas escaping from the can’s ring-pull will project the can in the opposite direction. Of course, you usually hold the can firmly tight when opening it, and so the whole system of yourself and the coke can is shot through the cabin. Eventually you figure out how to point the top of the can straight up and position your feet on the ground. You can open your can and absorb the pressure with your legs. Then you then come across the problem that the ring-pull is not perfectly symmetrical. The gas escapes from one side faster than the other. The coke can may twist from your grasp, spraying liquid sugar in a Catherine Wheel of gunk. Alternatively, you may be the one to start spinning. 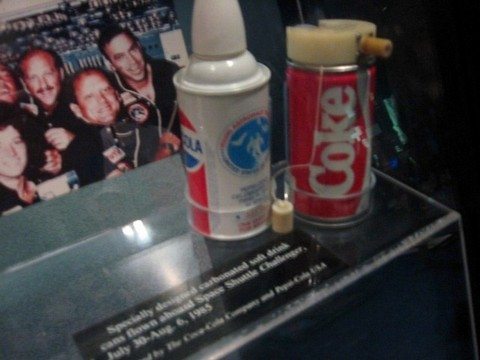 The picture above depicts the 1st of 3 total attempts to drink soda in space. According to Wiki in 1985, Coca-Cola and Pepsi were launched into space aboard the Space Shuttle Challenger on STS-51-F. The companies had designed special cans (officially the Carbonated Beverage Dispenser Evaluation payload or CBDE) to test packaging and dispensing techniques for use in zero G conditions. The experiment was classified a failure by the shuttle crew, primarily due to the lack of both refrigeration and gravity. But on the lighter side of space, floating “soda balls” did provide a source of entertainment for the astronauts.

Only thing confirmed here: Coke and Pepsi will do anything to reach marketing’s new final frontier: SPACE.