This past Saturday a select group of foodies where invited to join in a day at at Jean Talon market. This great idea was devised by Johanne Latour. I am honored to share with you her account of our outing. It really is a treat as Johanne is a journalist, editor and researcher of the food industry. She has even worked on the populer JosÃ©e Di Stasio show. But most important she is a dear friend of mine. Pics by Bernard Reischl. 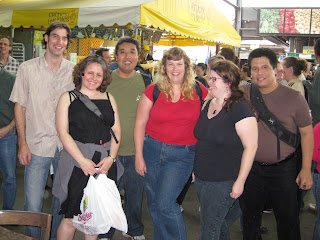 Everybody knows that some of the coolest food shopping in can be done in and around Jean-Talon market, but not everyone goes as often as they would like to. Thatâ€™s the case with me, anyway, as it is a bit far from where I live. So, I thought â€œWhy not organise a little outing in that area with a few food lovers, including Evelyne and some of the other devoted foodies that I met in her Cheap Ethnic Eatz Meetup groupâ€â€¦

On a grey but warm Fall afternoon, nine people showed up, as planned, around at the Jean-Talon metro station: Evelyne, Olivier, Agustin, Bernard, Julia, Myke, Sylvie, Jerome and myself. It was an informal outing (not an actual Meetup event) and we chose to keep it small. If youâ€™re interested in getting a taste of our fabulous foray, read on.

Before hitting the market, there were three stops on the itinerary. Since most of us were hungry, it was fitting that the first one was at Motta (303, ). There, large refrigerated counters contain a tantalizing array of dishes â€“ pizza, pasta, meat, fish, salads, etc. â€“ to be taken â€œto goâ€ or consumed in the adjacent dining room. The employees were so busy that it took them a looooong time to heat up everyoneâ€™s plate. (Saturday may not be the best day to eat thereâ€¦) By the time I got my delicious fried risotto balls, the rest of the group was almost finished eating. â€“ Must have been good! 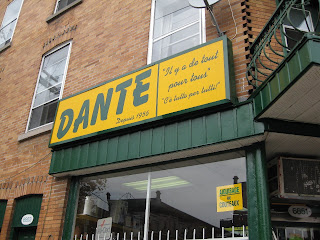 Before leaving Motta, most of us stopped by their pastry counter to get some desserts. Cannoli were especially popular, as well as a lemony delight that, if memory serves, is called tarallucci.

Then, we turned onto Dante street and were in awe of the crazy cakes (including a huge replica of the Tower of Pisa) in the windows of Alati Casertaâ€¦ but we stayed on course, for our second destination was Quincaillerie Dante (6851, Saint-Dominique). Some in the group had never been there before and were surprised to see that there was a section devoted to hunting, guns and all. But since we are lovers, not fighters, we quickly left all that behind and delved into displays upon displays of kitchen accessories. Cute salt dishes, a fun cake slicing/serving device, pots and pans galore, heavy-duty equipment for serious tomato sauce makers: this place has everything for the kitchen. Really, everything.

Of course, we had to go to Milano (6862, boulevard Saint-Laurent), a mythical grocery store if there ever was one. Pasta, sauces, olive oils, cheese, coffee: the selection is as vast as it is tempting. Recipes were discussed, purchases were madeâ€¦ and we were off to the market! 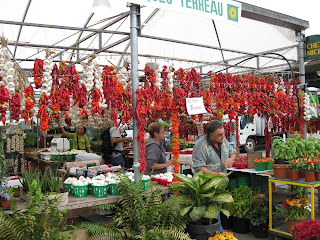 As the afternoon was coming to an end, we visited part of Jean-Talon market, guided by the lovely sights and smells of freshly harvested produce and all sorts of specialty foods. Olives et Ã©pices (a store filled with fine olive oils and spices) was a hit among our little group, and a few of us indulged in some delicious ice cream at Havre aux glaces. Even if we didnâ€™t have enough time left to really go around the market, several things were sampled, bought and admired.

As we were looking at multicoloured garlands of peppers, we noticed that a wedding party was being photographed at a nearby stand. As the bride and her entourage were leaving, it was quite surreal to see her casually strolling by in her pouffy white dress, while eating a banana! You never know what you will encounter in a bustling market such as Jean-Talon, but one thing is for sure: the great products and the ambiance will make it worth your while.