Wow I had a fabulous evening this past Wednesday, a magical metropolitan night basking in some of the best cultural delights Montreal has to offer. I was originally going to try a tiny restaurant hidden in Verdun with my friend Johanne. The day before she got in touch with me saying she could perhaps get free ticket to the very special event of this year’s Fantasia Festival event: Metropolis (see below).

Sure, I am up for it, I had no idea really what we were attending. All I knew is that it was taking place at the Place des Arts (PDA) which meant our Verdun resto would have to wait for a future outing. And my mind was racing as to where to eat around there. The core downtown area is not crawling with funky and nice foodie haunts. We walked along Ste-Catherine in search of something decent. I was also getting paid at midnight so let’s say budget was really an issue, to a certain extent. 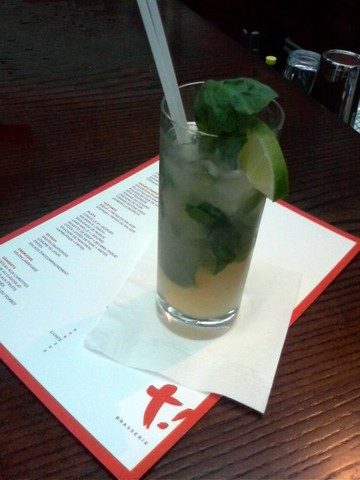 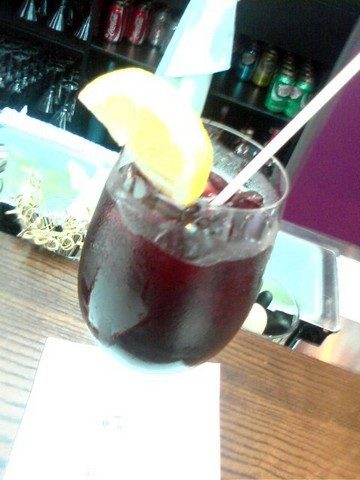 And then, like a savior appearing before troubled souls, we saw in the distance the new “IT” place in town right next to the PDA….Brasserie T!. It is so new (1 month) that neither one of us thought about this place beforehand. So why such a buzz for a new place. The owner is the same as Toqué, one of Montreal’s absolute top restaurants. The good news is the prices at Brasserie T! are a lot more reasonable compared to Toqué.

Brasserie T! is smack dab in the middle of the PDA, the Contemporary Art Museum, the Place des Festivals where numerous international outdoor festivals take place and the brand new Maison du Festival Rio Tinto Alcan. The restaurant itself has a very peculiar architecture I would say almost reminiscent of a long glass bus stop. It’s a very narrow and long rectangle. From outside I find it off putting. From inside you forget about it. 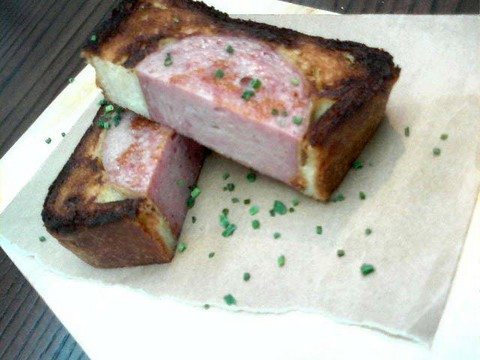 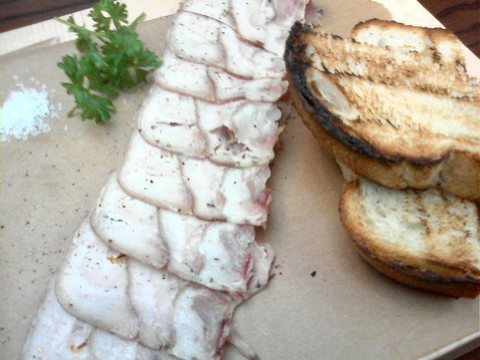 We did not know if we would even get a table. Turns out the 6 stools by the bar are reserved for ‘walk-ins’. They were all empty. I normally hate eating at the counter but this time it turned out to be the best seats in the place I think. Sara, the bartender who also took our orders, was just a jewel. I really, really, really liked her. We each had a cocktail…really original ones. Totally from memory but Johanne had the Jeanne-Mance Collins which included vodka, limoncello, absinthe, fresh mint. She was actually the first official customer to order that drink, it was brand new. It was AMAZING. I had the Purple Splash which had gin, raspberry blueberry and something else with a bit of hot peppers and served with ground pepper on top. Really unique but there was something missing.  Sara really took the time to ask our opinions of the drinks and was open to my suggesting a couple of drops of Bitters. She was very happy to oblige, welcomed suggestion and took note of it. 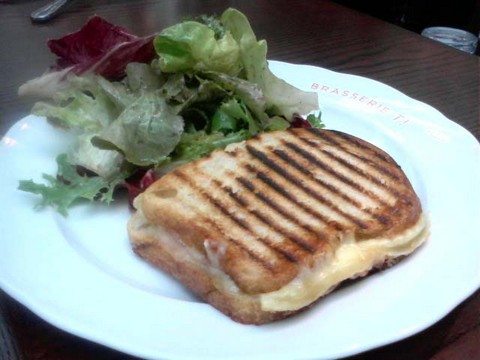 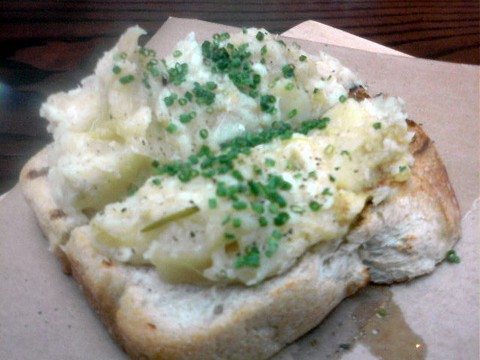 Our bartender was just as attentive and knowledgeable when it came to our food selection. The winner in the Charcuterie was my Tête fromagée. It was just divine and melt in your mouth. In English it is called Head Cheese, a meat jelly. The winner in the Plats category was Johanne’s Croque monsieur. At first she was a bit surprised it had 2 slices of bread, presented like a grilled cheese almost. Oh but was it good, the cheese so flavorful and there was a poached egg in the middle. Really the only dish out of the 4 that left me a bit indifferent was mine, the Brandade de morue, which I found a bit bland. An interesting note though: the bread had been drizzled with excellent olive oil quite liberally before placing the cod dish on top, that I enjoyed.

Before or after a show, if you can get a table or stool, Brasserie T! is a fabulous place to go for a true French Bistro bite to eat if you have a bit of extra money compared to what I normally blog about. A cocktail, a charcuterie and a plats came out to $35 before tipping. Exclamation mark.

So this is just dinner! Next was the movie Metropolis. Metropolis is a 1927 German expressionist film in the science-fiction genre directed by Fritz Lang. Metropolis was cut substantially after its German premiere, and much footage was lost over the passage of successive decades. Today the film has been restored and 30minutes of lost footage has been added. These 30 min actually change the whole view of the movie. This film has such a strong influence is was  inscribed on UNESCO’s Memory of the World Register in 2001. 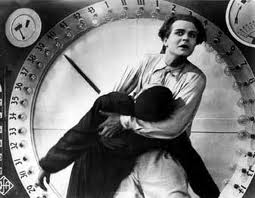 Many considered this cinematic presentation a real coup for the Fantasia Festival. It was show on closing night. A 3,000 seat sold-out presentation for a silent 83 year old film. A 147 min silent film that was accompanied by an orchestra. Internationally renowned silent film composer Gabriel Thibaudeau wrote a new score for the film, which he performed with a 13-piece orchestra live at the screening. A very long standing ovation closed the performance.

I am not sure how to describe the experience. Palpable and surreal are two words that come to mind. It was one of those just profound once in a life time experiences sprinkled with a dash of magic. At first I did not know what to think of the movie but later on I realized how powerful its message was. It was captivating and a still valid sociological critic today of basic morals and values. Closest to it I ever saw would be Ingmar Bergman’s The Seventh Seal.

If you ever have a chance to see Metropolis this way make it your priority.